Nigerians who could not hide their anger and frustration have taken to social media to blame Big Brother for what he did during Friday night arena games. During the task, the first team were delayed by Biggie for not following the rules as instructed by Big Brother. 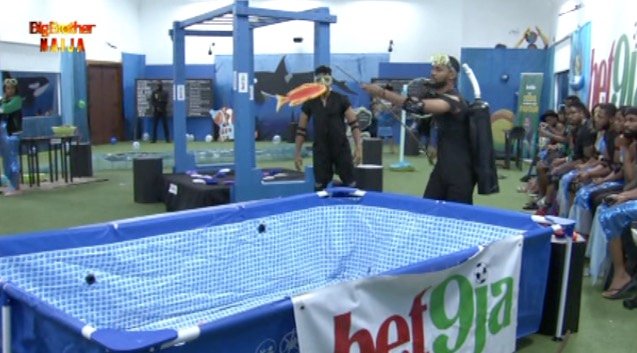 The team kept on repeating the task until they got it right and this made them finish in 5minutes 30seconds. Nigerians think Big Brother did not do well by using the first team as a scape goat for other teams. Some said Big Brother could have explained better to the housemates and if possible organize some Ninja’s to rehearse the task for the housemates to understand better. 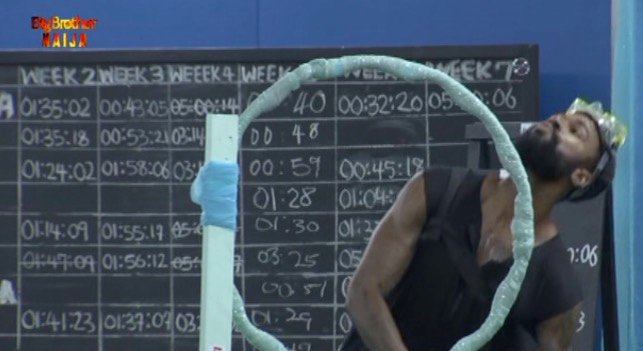 Omashola who happened to be in the first team could not hide his feelings as he almost broke down in tears. People think the first team should be allowed to redo the task because of the delays from correcting them.

Biggie and ojoro are 5&6

Omashola is going to kill someone tonight 🤣🤣🤣🤣, Gidone I feel for you

@BBNaija just check d comments and see u are a scam, fraud, bias and a confuse organizer, do d needful concerning team 1, Dont use them as scapegoat

Where is your fairness here! What are the ninjas there for? They should be the ones to do the first demo … bunch of bs organisers!!! #BBNaija

Not a fan of any of them but that was unfair. I thought after all the corrections they would restart

They shud hv redone it

Bigbrother this is not fair. Why did you do this. You want them to fail

It's not fair they should redo it again, first persons to play games do not always win, they are used as samples for others to learn. Biggie illustrate first before they start

Do you think Biggie is doing Ojoro?

Previous story :[Video] 5 Pictures That Should Have Stayed Secret!

Next story :BBNaija: ‘My Brain Will Spark’ – Seyi Tells Tacha What Happens When She’s With Other Guys (Video)

Photos of Actor Charles Billion's son with a US based woman

Photos of Actor Charles Billion has just found it’s way to the internet, two years after he welcomed a baby boy with a woman that is based in the United states of America. The Nollywood star has kept his 2-year-old son away from the spotlight. He hasn’t shared and pictures or photos of him, but
November 14, 2019November 14, 2019

BBNaija: Isilomo And Ella Spotted Fighting On The Road After Interview (Video)

BBNaija: Isilomo And Ella Spotted Fighting On The Road After Interview (Video) The 2019 Big Brother Naija show themed ‘Pepper Dem’ seem to be dull on the inside but spicy hot on the outside. Ex-housemates, Isilomo and Ella are currently trending on social media after they were spotted fighting i
August 2, 2019August 2, 2019

Former 2018 Big Brother housemate, Dee-One, in a new post said he would have won if he had brains like Seyi, who is a BBNaija 2019 housemate in the onging BBNaija ‘Pepperdem’ edition. Deeone shared the video where Seyi was talking about severing closeness with Tacha as the reason for putting her
July 31, 2019July 31, 2019

#ViralNow: Hilarious comment by mother to son after she caught him ma$turbating

Deyemi Okanlawon and his beautiful wife Damilola are celebrating seven years of being married. The Nollywood actor, took to his Instagram to share some before and after photos of how great married life has been with his wife. The couple has been married since the year 2013, and has reached the 7th y
January 7, 2020January 7, 2020

Guess What If Everyone Lived in Just One City (Video)

Watch What If Everyone Lived in Just One City. Current estimates put the whole world inhabitants at simply over 7.7 billion, and urbanisation is growing. So, what would occur if everybody lived in a single metropolis? Lets find out! Watch video below: Download VIDEO Amazing Clips Funtime
August 10, 2019August 10, 2019

Toyin Lawani's staff, JP Blush gets huge tattoo of her name on his butt (photo)

Crossdresser, JP Blush, who models for Toyin Lawani, has shown his love for his boss by getting a massive tattoo of her name on his butt. JP Blush doesn’t fail to publicly profess his love for Toyin. He even once went toe to toe with Bobrisky and dragged him for coming for Toyin. The tattoo
July 28, 2019July 28, 2019
Next