The Pepsi Know Da Lyrics challenge has unleashed a singing career for the Pepper Dem gang – courtesy of Pepsi Nigeria. It is a two-day challenge and the housemates were graciously dressed in branded Pepsi T-shirts and slides. It was quite amusing watching the Pepper Dem gang have a lyrical battle as they sang along to All Over by Tiwa Savage, Nwa Baby by Davido, Case by Teni and Green Light by DJ Cuppy x Tekno. 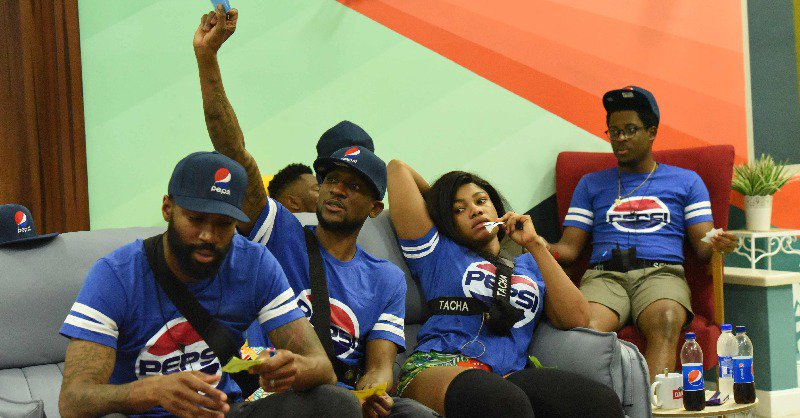 While some took the challenge rather serious, others entertained us as they went about the rehearsals. Like Mike. On the second day of the challenge, Biggie started eliminating housemates from the challenge. The first to go were Sir Dee, Khafi and Mercy.

Biggie was not impressed by Sir Dee, Khafi and Mercy as they have been disqualified from the challenge. Who’s next?#BBNaijahttps://t.co/uFHltiqZnA pic.twitter.com/qyoNaZvQUc

They were quickly followed by Tacha and Thelma.

Tacha and Thelma are out of the challenge. It’s getting spicy in here, don’t you think?#BBNaijahttps://t.co/uFHltiqZnA pic.twitter.com/OGuSxw0dKN

Frodd, Ike and Gedoni were next in line.

Nelson, Diane and Jeff were eliminated by Biggie from the challenge.

Nelson, Diane and Jeff are out of the ‘Know Da Lyrics’ Challenge.#BBNaijahttps://t.co/x3D26SNgaM pic.twitter.com/LX5QpBJ38G

Seyi and Jackye were the last housemates standing in the race for 1.5 million Naira and a 4-day all-expense paid VVIP trip to One Africa Music fest in Dubai.

Meet the Finalists! Seyi and Jackye.
Who is winning this challenge? Local man is anxious to know.#BBNaijahttps://t.co/x3D26SNgaM pic.twitter.com/LYkna2y6So

At the end of the tie breaker, Jackye emerged winner.

To answer the big question, who do you think will win the challenge, fans of the show leaned more towards Jackye than Seyi even before she won. Here are some comments gathered from Twitter:

“Let the best person win, in as much Jackye pisses me off, I’m rooting for her.”

“Jackye got the Pepsi vibe tonight… She’s killing it with her swag… Seyi de Sugar Daddy.”

“If Seyi wins he will give it to Thelma….so Jackye might as well win and buy herself a simply Tacha bracelet from the money since she envies it so much.”

“Jackye is winning it not cuz I like her or hate her I can see her strength and she knows all the song.”

“Hmmm…Jackye wins and will automatically become a nomination candidate next week..”

“Since Seyi’s show of kindness, he’s been a finalist twice, I’m sure he’s winning this. He’s definitely staying in the house till the last day.”

“Jackye is so good. I applaud her efforts in this Pepsi challenge. Hope she wins.”

“I will like Jackye to win as a compassion cos she ain’t gonna win the main prize.. I like her effort so far.”

“Let’s be sincere SEYI suppose to have been out ever since, I don’t knw how biggie used to do his things. But I stand with Jackye.”

“Jackey really killed it.. Am proud of her.. She put in all efforts to learn the lyrics and pace. She’s already the winner.”

“I said it and will continue to say it…Biggie wants Seyi to have it…he is leaving this Sunday, and he can’t leave empty handed…..the moment Esther was removed then the changed songs with typed lyrics and names on..I knew…they wanted Seyi to have the easy parts to pass …..”

Biggie can’t have a tie! This is an interesting competition!! Seyi and Jackye you guys are simply incredible keep it up!!!#BBNaija pic.twitter.com/Rezza7YdVh

“You were chopping married man in the closet, now it has been exposed”- Nigerian lady ridicules Tboss
#BBNaija: Isilomo comes for Ella and Kimoprah for saying Tacha has Body and Mouth Odour

Ebuka About To Trend Again With His Latest Agbada

Actress, Funke Adesiyan reportedly gets political appointment in the office of the First Lady of Nigeria

#ViralNow: Princess Shyngle Showcases Her Massive Behind In New Photos

‘I have the biggest record label in Africa’ – Davido boasts

#BBNaija: I’ll be bigger than the winner, Mike needs the money – Tacha says

E-Money Shows Off The Elegant Bedroom In His New Mansion

BBNaija: Khafi Floors 13 Others To Become Winner Of Veto Power Game Of Chance For Week 4