Pepper Dem housemate, Seyi Awolowo has given his fans something to talk about after he was spotted sleeping with his bae in the HoH room. 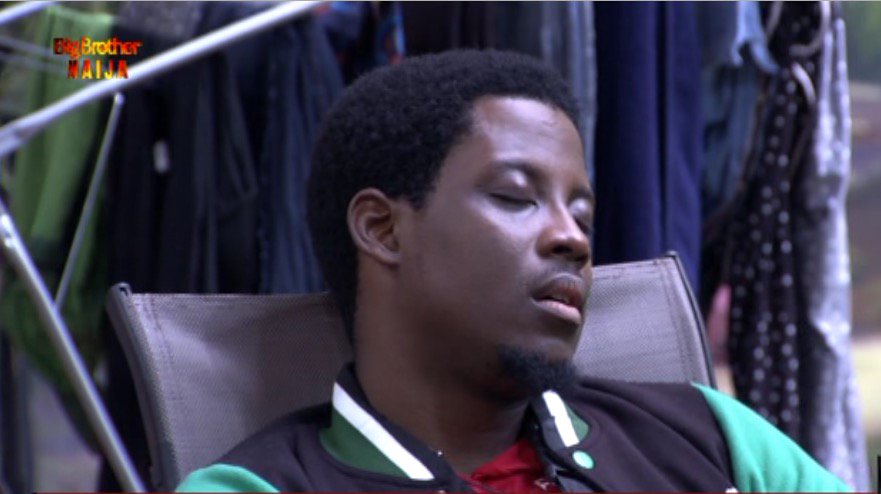 It was a really tiring day for the Big Brother Naija housemates as they got to crown the HoH, Seyi as the Tor Tiv per Biggie’s instructions. The Coronation Ceremony and the Grand reception were sponsored by Heritage Bank and it was a spectacular one.

After all the love play with Tacha, who he has confessed to be growing feeling for during the ceremony, it seemed the Tor Tiv was missing his fiance so much that he was spotted sleeping with a photo of her on the bed and it was so cute!

#BBNaija 🤣 🤣 seyi is missing her finance… Sleeping close to her pic.. Awwwww.. Should we tell tansha? 😂 😂 pic.twitter.com/BjA3FzRzt6

Some fans speculated that he was trying to reassure his fiance at home that he was still loyal to her while some just made fun of him. Here are some comments gathered:

Y’all really went to Seyi’s page to push your SECHA nonsense under a tweet that was dedicated 2 Seyi’s GF? Embarrassing ! You making it look like Tacha is desperate for that boy’s D, when in reality she doesn’t give a fuck. I’m embarrassed! #bbnaija pic.twitter.com/URTJBDPz8d

“Love Seyi and all oh. But who’s he trying to convince with that picture?? Himself or is?? Iyawo mabinu jor.”

“Ghen Ghen…. Poor Seyi. Today must have been overwhelming for him ooooo. The girlfriend pic is out. Uh-Oh!”

“Seyi….looking at your gf picture will not save you from those feelings ooi.”

“Seyi is sleeping with his babe picture beside him. You go hear am.”

“This camera man will not make heaven. From Seyi with the girlfriends picture to Tacha on her bed.”

“Did anybody see Seyi staring and sleeping with his Gfs picture?? Where are all the secha shippers oo?”

#BBNaija watching highlights So Seyi sleeps with his girlfriend’s photo on the other side of the bed , wonder where he kept it when Tacha was around .
( laughs in Secha shipment)😂😂 pic.twitter.com/hve2EZypiK

BBNaija is all about promiscuity not talent – Nollywood actress, Wini Lazarus says

#ViralNow: Flavor Shows Off His Body Abs and Tattoos In Shirtless Photos

“Wait and see now” – Davido speaks on expecting a child with his girlfriend, Chioma (video)

#BBNaija: I’d pick 60 million over you, — Ike tells Mercy, as their relationship ends