Top Nigerian comedian, AY Makun turned a year older recently and in light of this, fans and colleagues of the comic act showered him with birthday wishes and all – his wife was definitely not left out in also wishing him a happy birthday. 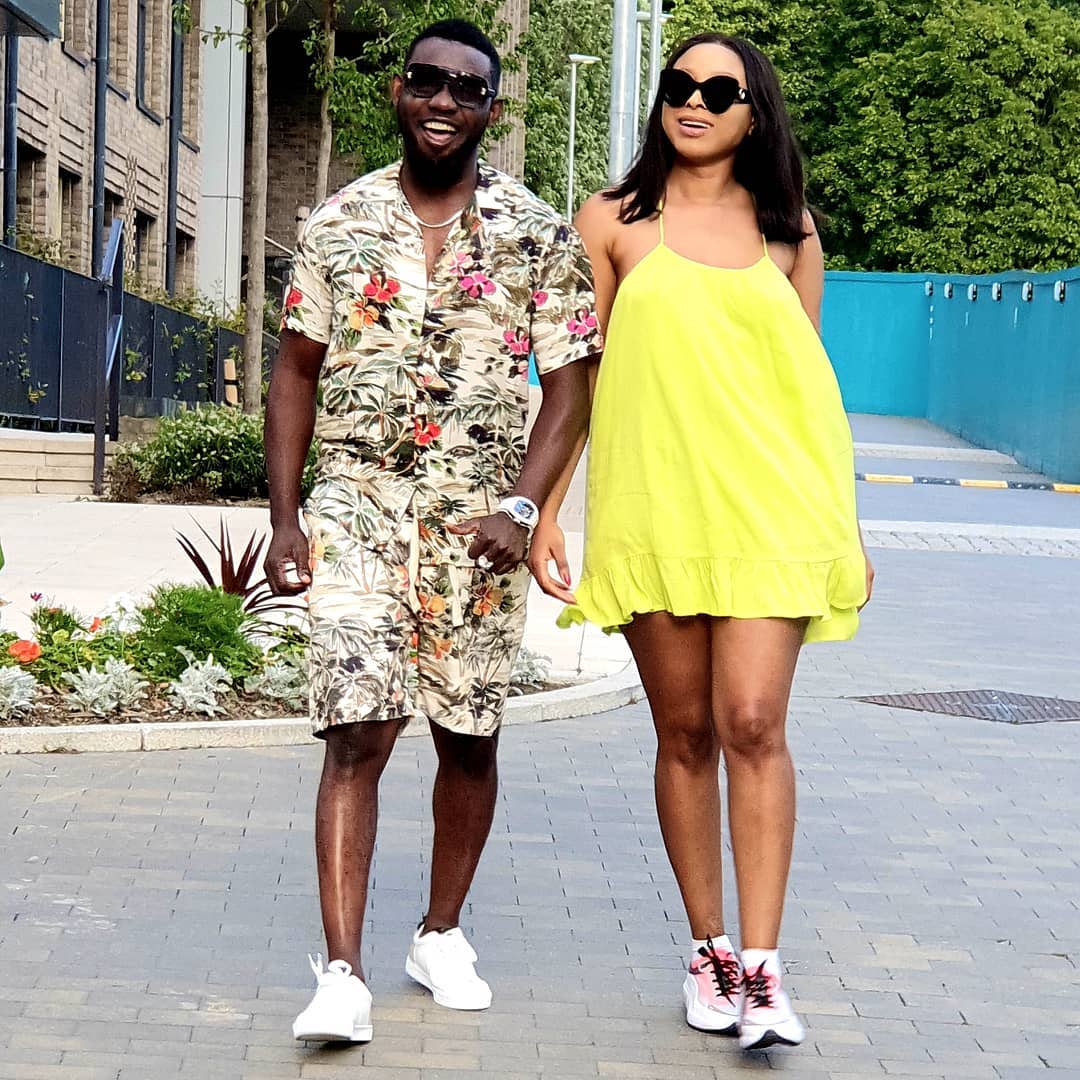 Shortly after the entertainer shared a video of his wife, Mabel singing a birthday song to him as he celebrated his 48th birthday, he was dragged into an exchange with a follower who alleged that she looked unhappy.

Commenting on the video, the follower stated that Mabel looked unhappy when everyone else is celebrating her husband. She further asked her to put on a big smile for him.

Why does she look so unhappy ,were celebrating here not otherwise.pls put on a big smile for AY the grand master of laughter.

AY in his response to the comment, pointed out the follower’s ‘unsolicited concern’ while blaming his wife’s look on travelling for hours. He wrote;

@jo.sephine281 when you travel for hours and land very early in the morning, don’t expect too much. The smile you are looking for in one video, i have been getting for 15 years. Thanks for your unsolicited concern 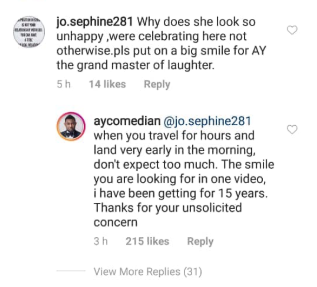 His wife also reacted to the comment as she backed her husband on her tired look being because she was jet-lagged. She wrote;

My husband reposted a video of myself wishing him happy birthday and someone commented on his page saying i looked so unhappy. Truth is, sometimes things are not really the way we see them. There i was feeling very tired from a long flight that i wasnt really prepared for,jet lag and the time difference didn’t make it any easier for me coupled with the fact that i had to follow up on everything happening back at home.

My husband enjoys me singing for him. Knowing that i wasnt physically present and i really wanted his birthday to be special, i decided to make a video. Whoever you are @jo.sephine hopefully this solves the puzzle in your head. 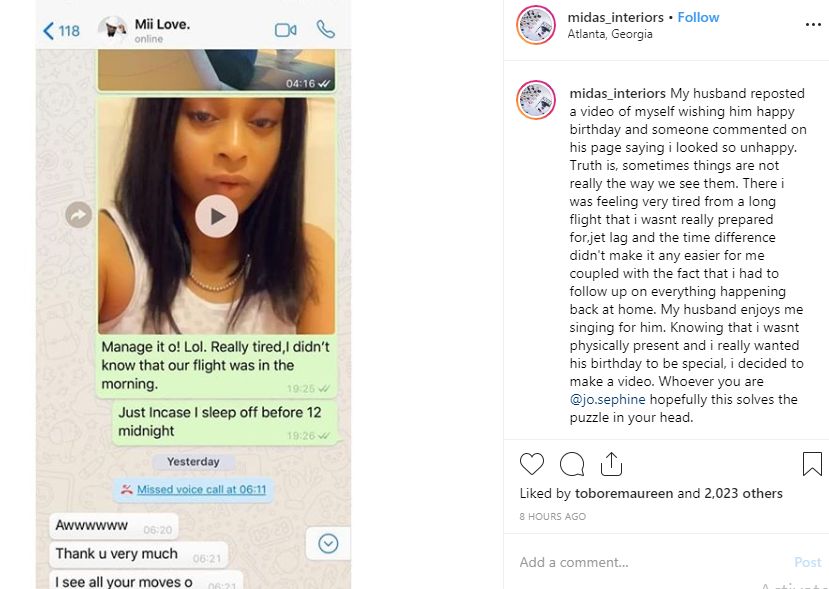 Previous story :Ubi Franklin reacts after fourth baby mama, Sandra Iheuwa says she will rather iron things out with the devil than with him

Next story :Princess Shyngle busted after stealing Instagram user's body and using it like it were hers

Tamira Bello, daughter of rapper/singer Abdul Rasheed Bello aka JJC Skillz, graduated with a BA Hons Media and Communications (Television) from a UK University yesterday, July 26th. The proud dad was there to celebrate with her and he shared photos online. See more photos below. trending
July 27, 2019July 27, 2019

"When I used to be innocent"

Dancehall musician, Shatta Wale’s baby mama, Michy has shared major throwback photos on her Instagram page. She noted that these pictures were taken when she used to be innocent. The photos sees her with her cousins. One of which is in the US Army. Sharing the pics, Michy wrote: “Major throwback
July 27, 2019July 27, 2019

Wizkid’s 29th birthday on the 17th of July, 2019 was a memorable one. Barely 24 hours after he added another year, his 3rd Baby mama, Jada Pollock sent shockwaves on social media after dumping the Nigerian superstar publicly and accusing him of domestic violence.   Shortly after that, his second
July 19, 2019July 19, 2019

Former Manchester United Defender, Rio Ferdinand was invited as a guest to the Guinness Night Football event holding tonight and he is in the state already. He was pictured with DMW music boss, Davido at a press briefing the football legend with Davido other musicians that will perform at the event
February 2, 2020February 2, 2020

Nollywood actress Lydia Lawrence-Nze is introducing us to her baby girl, Mercedes Starr Chizigam Nze. The beautiful actress shared a photo of herself and the bundle of joy in the hospital, with a caption describing how glad and blessed she is for bringing forth a beautiful girl to the world. She wro
January 23, 2020January 23, 2020

”Khafi will definitely make it big outside the house” – Nigerians reacts to Khafi’s eviction.

Nigerians have taken to social media to react to Sunday’s eviction of Big Brother Naija’s housemate, Khafi Kareem. Khafi was put up for eviction last week by the trio of Seyi, Ike and Mercy, and she scored the least percentage of votes which meant her journey in the reality show came to an end o
September 16, 2019September 16, 2019

Nollywood actress, Nkechi Blessing Sunday who was a die-hard supporter of Tacha before her disqualification has opened up about the criticisms she endured from Nigerians for being a top fan of Big Brother Naija housemate, Tacha. She took to her Instagram page to make her opinion known. She wrote: Om
September 29, 2019September 29, 2019
Next