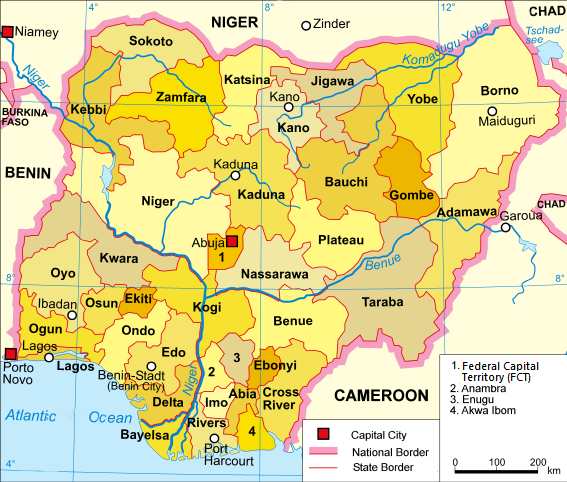 State and capital in Nigeria as a sovereign state. Read from here the complete list of Nigerian states and capitals.

State and capital in Nigeria, a serious challenge for youths and adults if asked as a question. Unless you are in pre-secondary school or probably secondary school in Nigeria, listing all the 36 complete states in Nigeria with their respective capitals is tasking. Ask the one beside you too.

With the look of things, we’ve come this end to highlight the chronological order of State and capital in Nigeria by letters, that is, the list of Nigerian states and capitals in alphabetical order.

Nigeria is divided into states which are federated political entities that share sovereignty with the Federal Government of Nigeria.

Remind someone, there are 36 States in Nigeria presently, bound together by a federal agreement, plus the Federal Capital Territory (FCT), which is not a state but a territory under the direct control of the Federal Government.

The Nigerian States are further divided into a total of 774 Local Government Areas. Under the Nigerian Constitution, states have the power to ratify constitutional amendments.

Abia is a state in the south eastern part of Nigeria. The capital is Umuahia and the major commercial city is Aba. Abia state was created in 1991 from part of Imo State.

Adamawa is a state in northeastern Nigeria , with its capital at Yola. In 1991, when Taraba State was carved out from Gongola State, the geographical entity Gongola State was renamed Adamawa State, with four administrative divisions: Adamawa, Ganye, Mubi and Numan.

Akwa Ibom is a state in Nigeria. It is located in the coastal southern part of the country, in the South-South geopolitical zone, and is bordered on the east by Cross River State, on the west by Rivers State and Abia State, and on the south by the Atlantic Ocean and the southernmost tip of Cross River State.

Anambra is a state in southeastern Nigeria . Its name is an anglicized version of the original Oma Mbala , the Igbo name of the Anambra River. The capital and seat of government is Awka. The state’s theme is “Light of the nation”.

Bauchi, usually referred to as Bauchi State to distinguish it from the city of Bauchi, is a state in northern Nigeria. Its capital is the city of Bauchi. The state was formed in 1976 when the former North-Eastern State was broken up. It originally included the area now in Gombe State, which became a distinct state in 1996.

[Continue reading this in our other article]

States and Capital in Nigeria

As sovereign entities, States of Nigeria have the right to organize/structure their individual governments in any way within the parameters set by the Constitution of Nigeria .

I don’t feature in romantic movies because anytime my husband sees me in a bedroom scene, he is always angry-Tola Oladokun