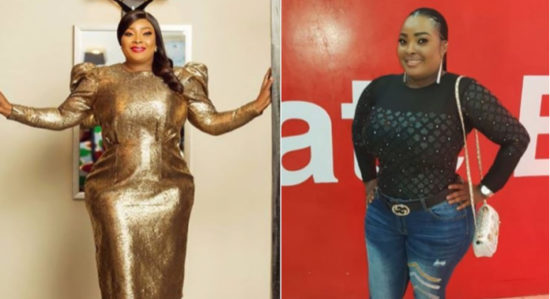 Nigerian actress, Ronke Odusanya is one of the few busty actresses that we have in the Nigerian Nollywood movie industry, but she has revealed she was very slim when she was a teenager, although she was still a bit busty.

Ronke Odusanya stated in a recent interview that she that slim girl with a big bust when she was in Secondary school and she would result to wearing 3 bras during inter house sport competitions because of boys.

The Nollywood actress also spoke a bit on her upbringing, her career as an actress and many other things.

While speaking on her physical features, the actress recounted an experience she had while in secondary school. The film star said that when she was still a teenager in school, she used to wear three brassieres because of her bust.

She said: “When I was in secondary school, the only sports I could do then was hurdles and then I was slimmer but I was a bit busty. Because it was a girls only school, we were always very shy when boys came. So on inter-house sports day, I will have to wear like three bras.”