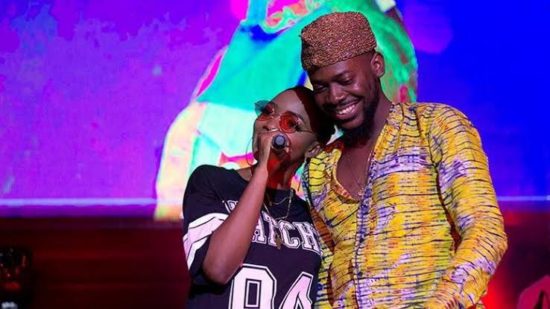 Adekunle Gold, his wife, Simi and his mother-in-law, Jedidiah Ogunleye are filled with humor, according to their recent conversation on Twitter yesterday.

Simi and Adekunle were kidding around on Social media before he stepped over the boundary which attracted a reminder from Simi’s mum that he is yet to completely pay her bride price, after Adekunle three a shade at Simi and her brothers on Twitter.

Adekunle Gold and Simi’s marriage will clock its first year anniversary in a few weeks. The singer’s got married in a private ceremony on Wednesday, January 9.

Since they got married, the couple’s have shown humor to each other on Social media. Often times, they’d throw harmless insults at each other but the recent one caught the attention of Simi’s mother, Jedidiah Ogunleye, who reacted by calling out her son-in-law, Adekunle Gold over unpaid dowry.

In the conversation, Adekunle posted a photo on Twitter, requesting that his fans provide a dope rapper name that suits his appearance.

Simi dropped a comment, referring to him as “Nigga” and asked him to stop.

Reacting to this, the singer wrote:

Simi’s mother, Mrs Ogunleye saw the tweets and call the singer to caution, with a reminder that he is yet to pay up his dues and he is also under close-watch.

”Adekunle, remember you’ve no finished paying all the dowry o. I am watching you”, she wrote.

See the conversation below; 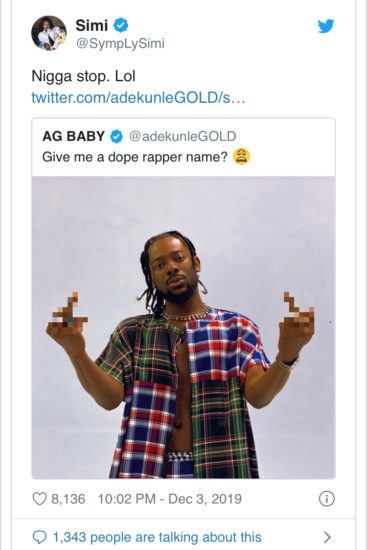 According to statistics emanating from the final day of the Big Brother Naija Season 4 ‘Pepper Dem Gang’ episode it is possible that Nigerians spent a whopping N7.2 billion voting for their favorites housemates. #BBNaija: Nigerians reportedly spent over N7.2 billion on votes alone Announcing the
October 7, 2019October 7, 2019

BBNaija: ‘Wetin concern us with your lineage’ – Frodd blasts Seyi Awolowo for bragging about his family

Just when Nigerians thought things had quite down in the female-artiste-drama-zone, Victoria Kimani, a singer from Kenya, seems to want to resurrect it again as she has dissed Nigerian music superstar, Tiwa Savage in a recent tweet seen. You would recall a few months ago that she had called out Tiwa
July 18, 2019July 18, 2019

The BBNaija ex-housemate, Cynthia Nwadiora popularly known as Cee-C rocks cute skimpy skirt looking so sultry and beautiful as she flaunts her glowing skin. She steps out in a black long sleeve top with print skimpy skirt, she pairs the look with a pair of nude stilletos and a black designer bag. Se
July 22, 2019July 22, 2019

“I like bad boys,” – #BBNaija's Ella says as she talks about relationship with Ike

Evicted BBnaija 2019 housemate Victoria “ELLA” Nnabuchi has spilled some details about herself as she visited the PULSE studio for a chat. One interesting part of Ella’s stay in the house was the romantic triangle she got entangled in with Ike and Mercy which she talked about. On her reaction
July 18, 2019July 18, 2019

BBNaija Sunday’s eviction is over and as usual, the voting Results were made public by the show and it revealed the huge GAP Tacha would have used to survive that eviction had she not been disqualified. Tacha’s management, took to her official Instagram page to share the results and appreciate t
September 30, 2019September 30, 2019

Make up guru Banke Meshida-Lawal and her husband Lanre are celebrating 13 years of marriage! The two shared cute videos of each other on Instagram, Banke writing: 13 ❤️. Where did the time go??? Wow! @mrsmith70 ❤️. The Bestestest Man Thank you for Loving me the way I want
February 11, 2020February 11, 2020
Next