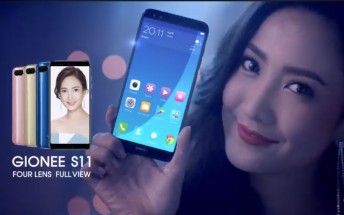 Gionee S11 smartphone was launched in November 2017. The phone comes with a 6.01-inch touchscreen display with a resolution of 1080 pixels by 2160 pixels.

The Gionee S11 is powered by 2.3GHz octa-core MediaTek Helio P20 (MT6757) processor and it comes with 4GB/6GB of RAM. The phone packs 64GB of internal storage that can be expanded up to 256GB via a microSD card. As far as the cameras are concerned, the Gionee S11 packs a rear camera of 16MP + 8MP with AF with LED Flash and 20MP + 8MP front shooter for selfies.

It has expanded into other markets, including India, Taiwan, Bangladesh, Nigeria , Vietnam , Myanmar, Nepal, Thailand, the Philippines and Algeria .

Hope we’ve provided what you need in Gionee S11 price and specs! The full specifications of Gionee S11 as in special features, battery, screen size, operating systems and more.

Itel A11 Review, Specs and Price in Nigeria<br>