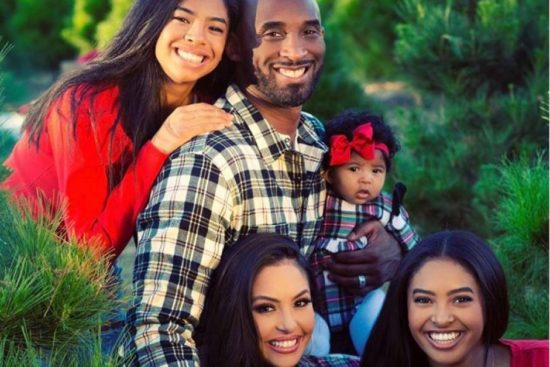 Vanessa Bryant, the wife of late NBA Legend, Kobe Bryant has found it difficult to move on past the emotional breakdown that was created by the tragic loss of her husband and 13-year-old daughter, Gianna after they died along with seven others in a tragic helicopter crash on Sunday, Jan. 26th.

In an emotional Instagram post, Vanessa disclosed that she’s having a hard time accepting that her husband and daughter are gone.

According to her, even when she tries to process Kobe being gone, her body refuses to accept that her daughter will never come back to her.

Sharing a heartbreaking video of Gianna and Kobe, she wrote: I’ve been reluctant to put my feelings into words. My brain refuses to accept that both Kobe and Gigi are gone. I can’t process both at the same time. It’s like I’m trying to process Kobe being gone but my body refuses to accept my Gigi will never come back to me. It feels wrong.

Why should I be able to wake up another day when my baby girl isn’t being able to have that opportunity?! I’m so mad. She had so much life to live. Then I realize I need to be strong and be here for my 3 daughters. Mad I’m not with Kobe and Gigi but thankful I’m here with Natalia, Bianka and Capri.

I know what I’m feeling is normal. It’s part of the grieving process. I just wanted to share in case there’s anyone out there that’s experienced a loss like this. God, I wish they were here and this nightmare would be over.

Praying for all of the victims of this horrible tragedy. Please continue to pray for all.

Next story :TBoss & her Baby look so adorable in new photoshoot 😍

Nigerian songstress, Simi Ogunleye, better known by her stage name, Simi, has warmed the hearts of many on social media after she replied a man who pleaded with her to attend his wedding. The groom-to-be tendered his request on popular micro-blogging platform, Twitter. In the tweet, the gentleman id
July 24, 2019July 24, 2019

BBNaija: ‘I want to play with Tacha’- Ike Tells Frodd His Secret Plan- VIDEO Believe it or not, Tacha’s return to the house has brought in more spice and Ike’s nose is currently runny at the moment because of all the heat involved.   In a viral video, Ike was seen talking to Frodd about
July 26, 2019July 26, 2019

#ViralNow news pick: 'We Need To Keep It Real To Prevent People From Getting Depressed' - Rapper Eldee Veteran Nigerian rapper, Eldee The Don has taken to his social media space to reveal the rising spate of depression amongst people due to the feeling they can’t keep up with the expectations of t
January 8, 2019January 8, 2019

Amidst Domestic Violence Allegations, Wizkid Shares Photo Of Himself And His Son Zion

Nigerian Afro beats king, Wizkid, was yesterday accused by his 3rd baby mama, Jada Pollock of domestic violence. She alleged that he always abused her by beating and bruising her. She kept all this to herself and waited until yesterday that was his birthday. So instead of wishing him a happy birthda
July 18, 2019July 18, 2019

Former Black Stars defender John Painstil is happy in his life most especially having a beautiful and adorable new wife beside him. Two lovely photos of Painstil and his new wife Adjoa Obroni have set the internet ablaze. They were pictured kissing romantically at the mall where they went shopping.
August 4, 2019August 4, 2019

BBNAIJA 2019: Another housemate confirms Jeff is a snake

During Jeff’s reign as the first head of house in the season 4 of Big Brother Naija reality TV show, he was tagged a snake by some of the housemates he promised to help with some Bet 9ja coins but did not eventually do as he promised. According to Khafi and Avala, Jeff promised to
July 15, 2019July 15, 2019

Ken Erics finally opens up on what happened to his marriage

Nollywood actor, Ken Erics, has finally opened up on why his marraige ended. Recall last week, Ken’s estranged Wife, Oni Adaba broke the news on social media in an Instagram comment section. According to her, Ken left their matrimonial home 10 months ago, abandoning her in trauma and pain. She als
September 15, 2019September 15, 2019
Next