Biggie Has Had Enough!

For a while now, some of the Housemates have shown flagrant disregard for the House Rules and Biggie chose the Thursday Task Presentation to make his dissatisfaction know to the Housemates.

Shortly before the announcement of the outcome of the Thursday Task Presentation, Biggie took time out to rip them a new one. Blaming their poor performance on their inability to drop their egos at the door and recognize that leaders need good followers, Biggie admonished the Housemates for being poorly behaved. A particular case was that of Housemates flouting the language rules in House. Biggie singled out Sir Dee, Jeff, Thelma and Diane for the continuous use of other languages without interpreting. A behavior Biggie deemed as insensitive to the other Housemates. 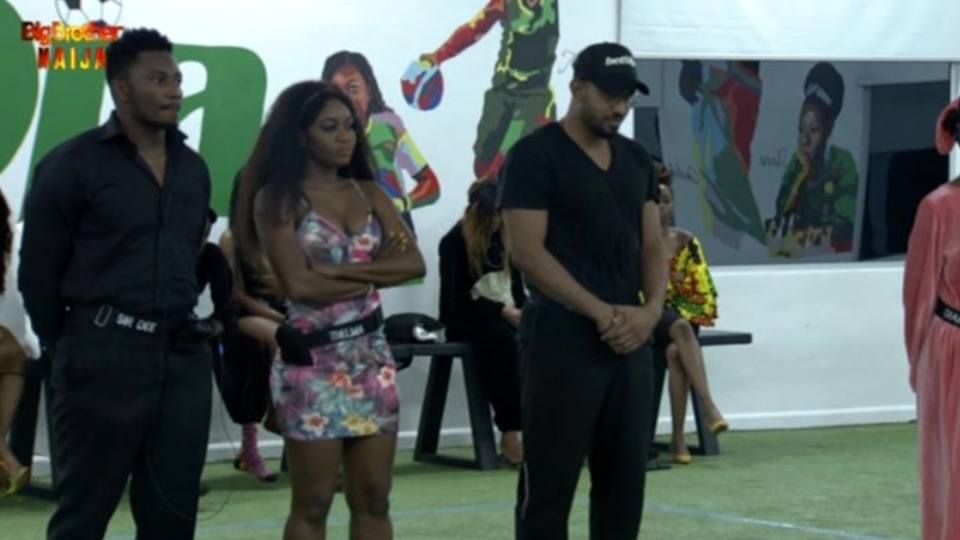 The failure of the Housemates to adhere to simple instruction earned them more reproach from Biggie. Their shenanigans during the Freeze session didn’t go down well with Biggie. The habit of finding comfortable positions to be in when the Freeze announcement gets made showed the Housemates disregard to rules. Not only do they find a comfortable position to undertake the Freeze exercise, but they also continue whispering to each other during the session. 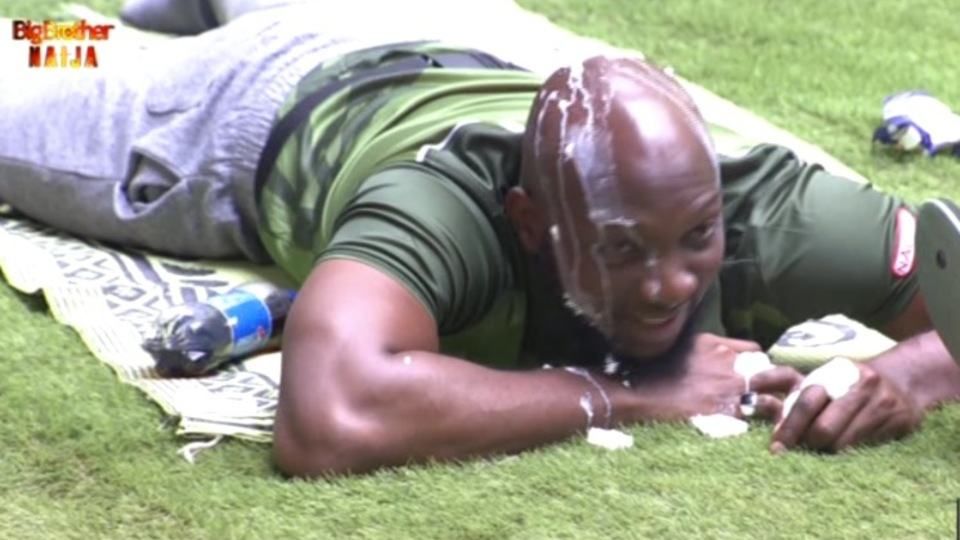 As it stands, Biggie has had it up to here with the Housemates flagrant disregard for House Rules and they face severe punishments should they continue on this path.

Was it a Kiss?

Finally, the Merike ship has sailed. Mercy and Ike shared a passionate moment in the garden last night that had us angling our cameras to get a clearer view. 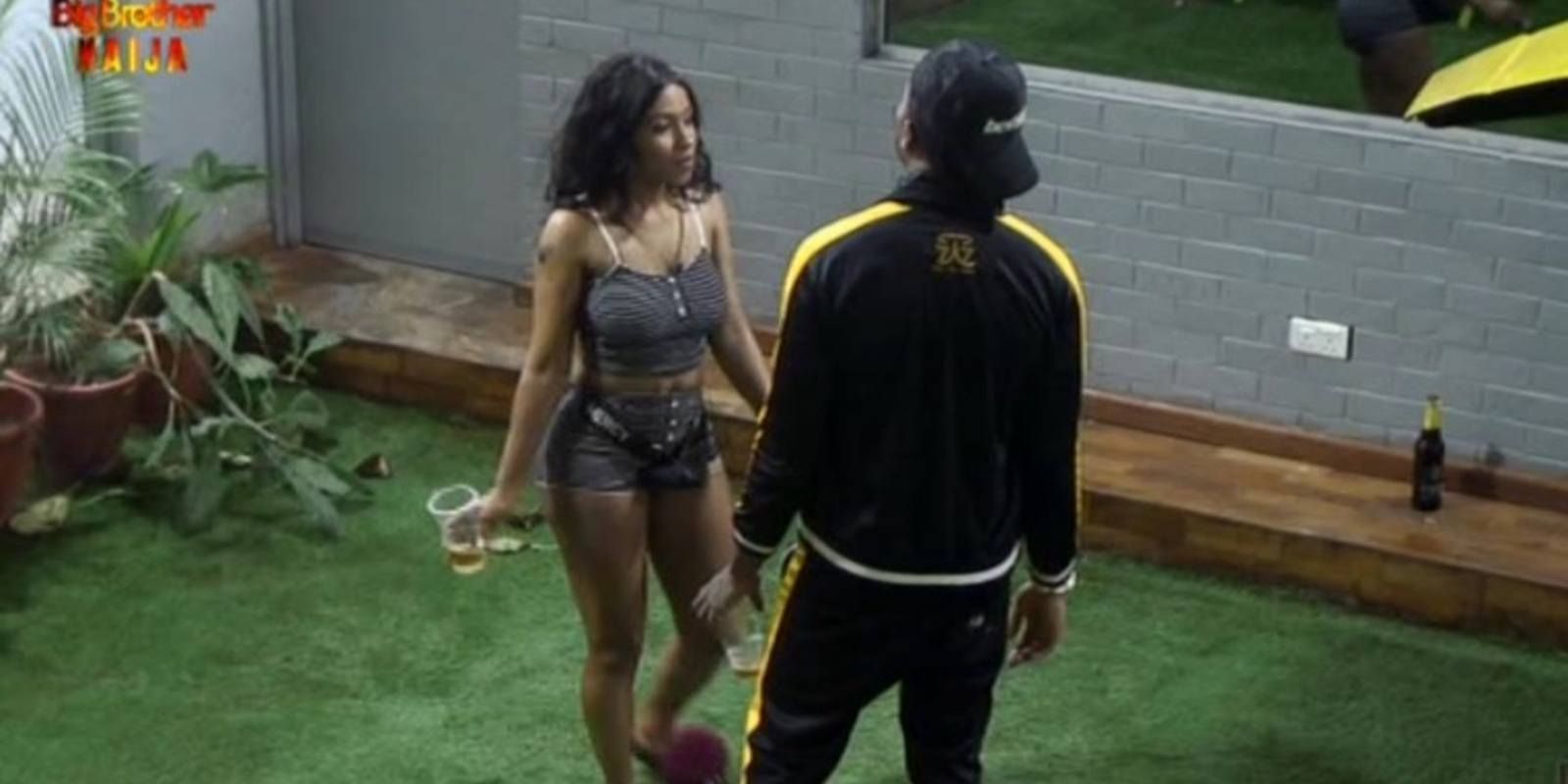 What started off as a gathering for Mike’s birthday soon ended with Housemates breaking into pairs. One notable pair was Mercy and Ike. These two were up in each other faces that we wouldn’t be surprised if they codedly locked lips. Did they really kiss or was it a play on our intelligence?

The love sprung couple soon migrated to the bedroom where they shared heart to heart discussions bordering on strategy and Housemates profiling.These two look like strong contenders for our other ‘ships’ in the House- Khafi and Gedoni as they are not slowing down in Peppering us with couple goals. 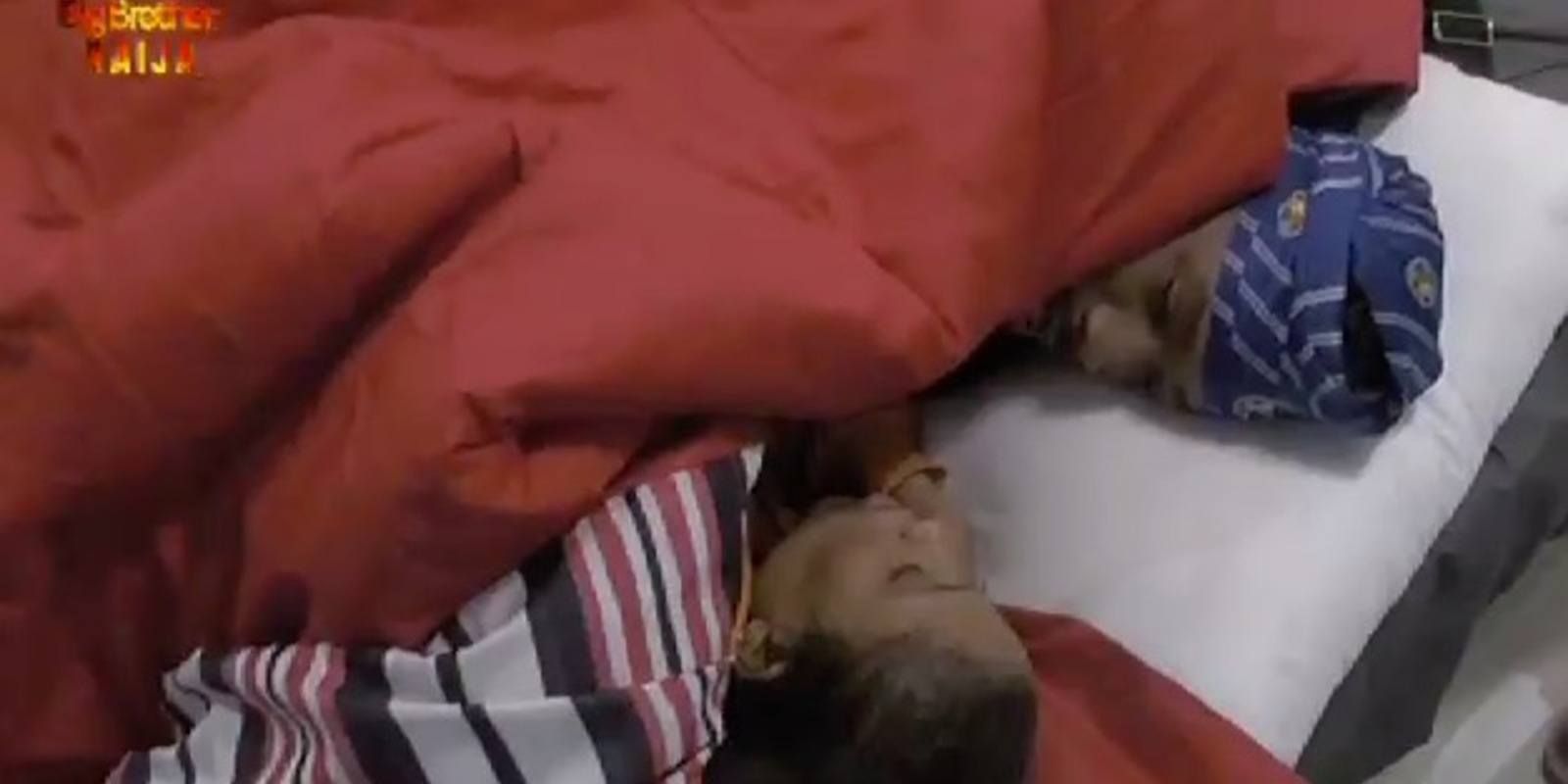 Ike’s priorities in the House hasn’t been very straight forward and this calls to question his sudden display of affection towards Mercy. Is he stringing her along as a strategy or could the ‘gangsta’ finally be in love? Mercy, on the other hand, isn’t a pushover either. Is she really love sprung or is she playing an elite game of faux romance?

Enough said on this matter, watch the pillow talk between them and be the judge of the romance that is going on between them.

The Housemates gathered in the garden to discuss the next line of action after they lost their first Wager last night.

The Pepper Dem Housemates didn’t Pepper Biggie enough with their play and the implication for this was that their allowance for next week will be affected. It was time for them to be prudent. Who better to lead the conversation than Seyi?

Comrade Seyi took it upon himself to address the Housemates about food wastage in the House. He highlighted the fact that most of the Housemates are in the habit of sipping their drinks and discarding the rest of it. According to him, this was something that will definitely work against them in the week to come. 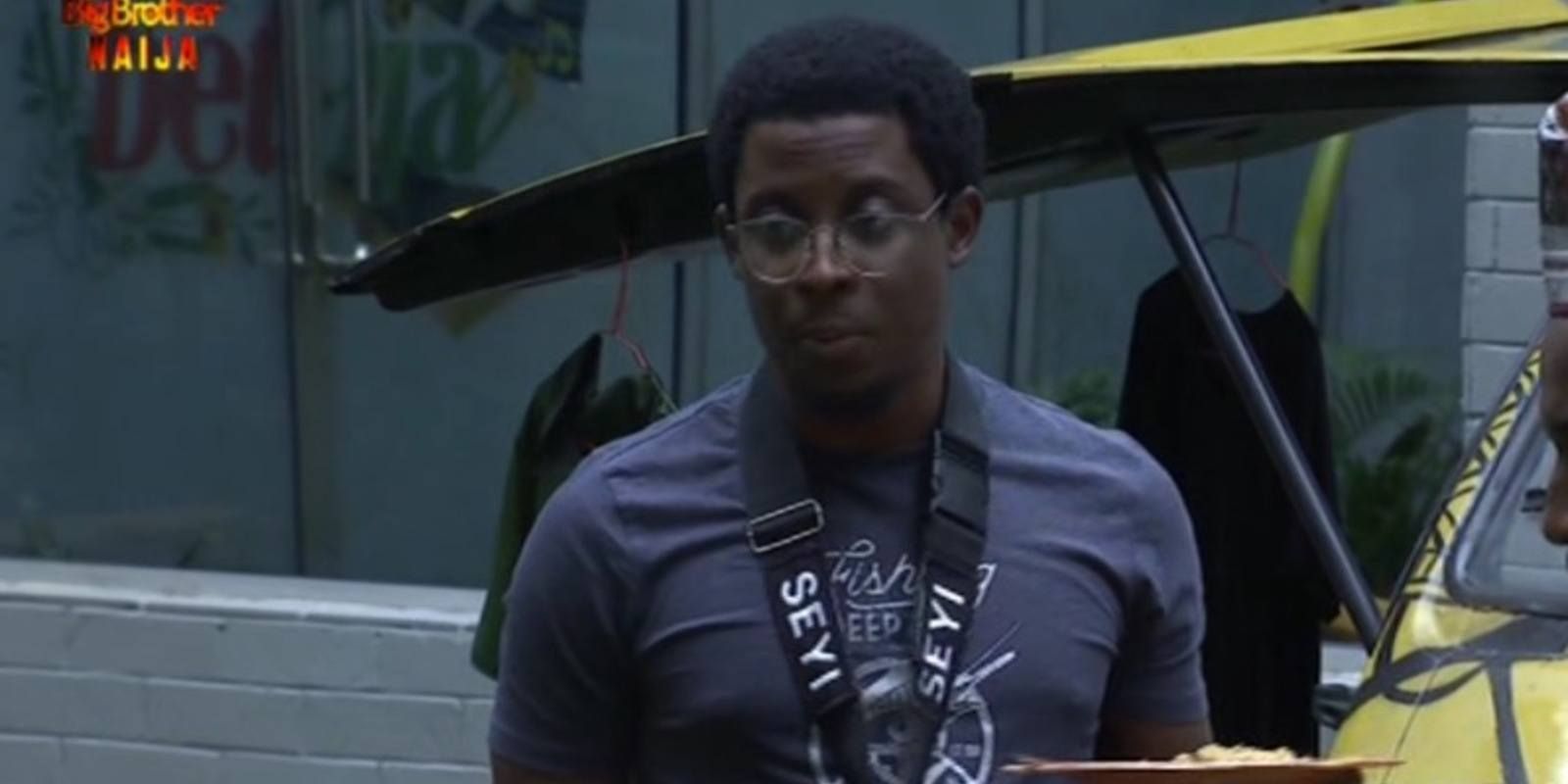 To ensure the Housemates adhere to the new rules of rationing, Seyi mentioned that he will be working hand in hand with KimOprah to ensure that fellow Housemates apply caution in their excessive eating habits. He also suggested that they come up with a kitchen timetable so it won’t be one person that will be doing the cooking. 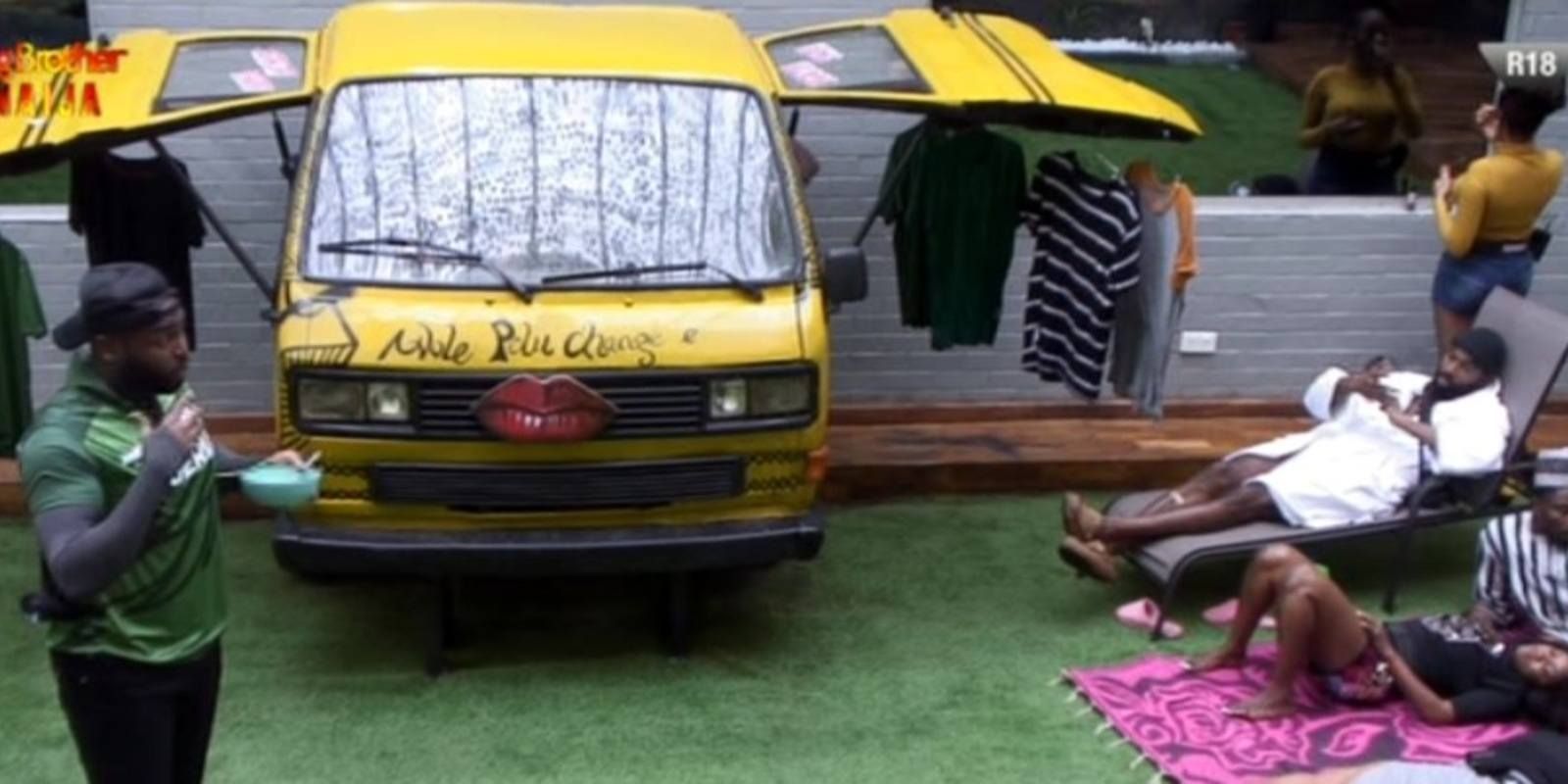 A Word is Enough

Other Housemates like Nelson, Mike, Tacha and Sir Dee also made comments on the matter. However, it was Sir Dee’s comment that gave the Housemates pause as he said: “This is Egypt and Joseph has received the dream”. Do you think the Housemates understood this proverb?

Eviction or not, Biggie wants the Housemates to have some fun this Saturday. And this is why the renowned Nigerian DJ Big N is coming in with full force to lavish the BBNaija Pepper Dem gang with great sounds. We can’t wait to have a blast with unique dance moves from our gentlemen and ladies in the House. 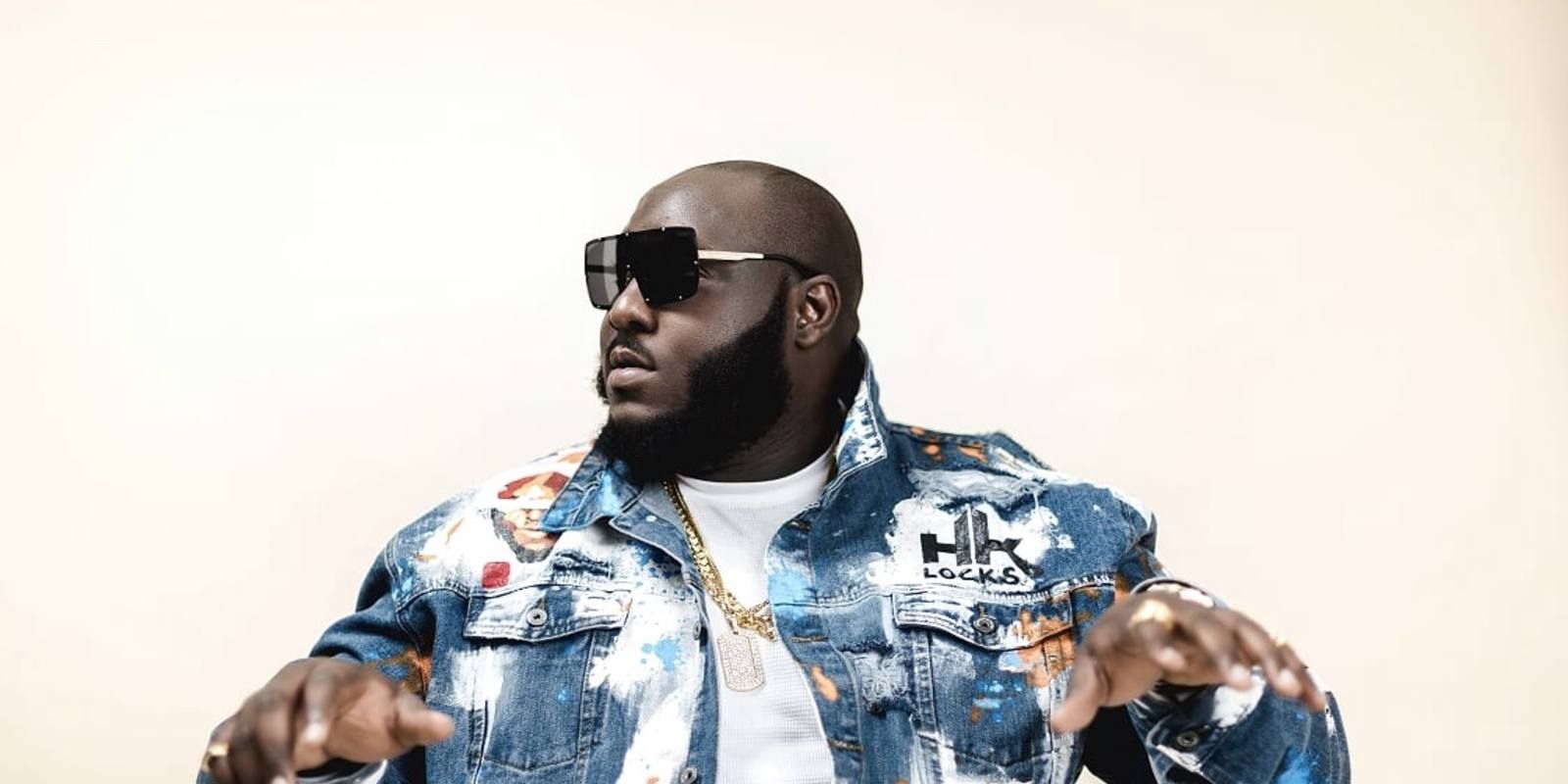 No doubt about it, the coming Saturday Night Party will mean a lot to the Housemates as the five of them up for Eviction await their fate the coming Sunday. So no surprises, if you see them gyrating to DJ Big N’s electrifying music like no tomorrow. 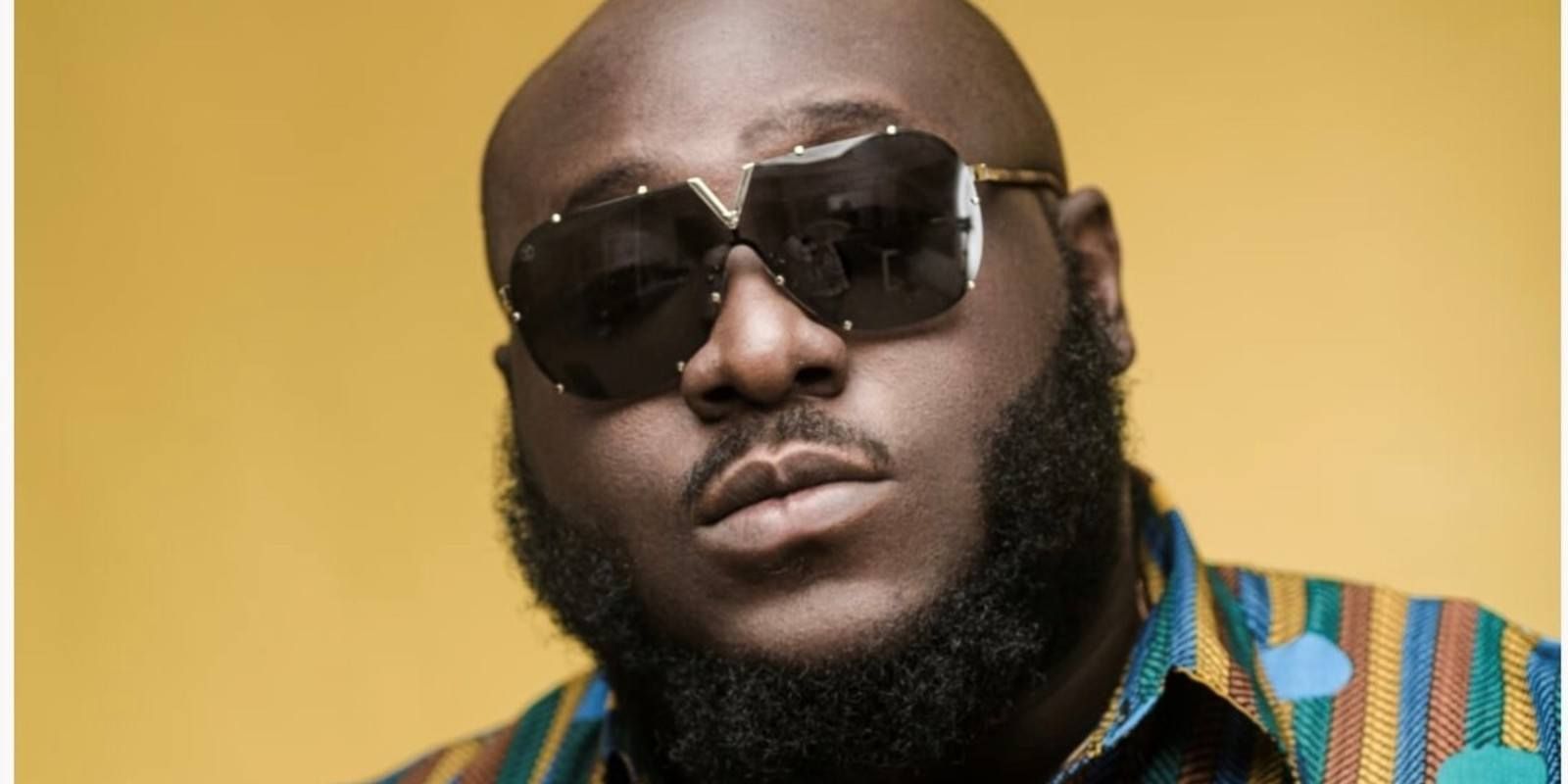 Now, what better way to light up the moods of our Pepper Dem gang as five of them get set for Eviction on Sunday? The University of Lagos graduate of psychology is set to bounce the Housemates off their Eviction worries. Ready to roll with us? Yes o!

Having lost their Wager due to their poor performance of the play last night, the Housemates have become remorseful. To loosen up their remorse, Biggie has decided to give them a Task if they must gain back their privileges. But the Task comes in three phases, the first of which is the Robot challenge.

To complete this challenge, the Pepper Dem gang must use the cardboard boxes earlier supplied. They must use these boxes as props as they turn themselves into robots. 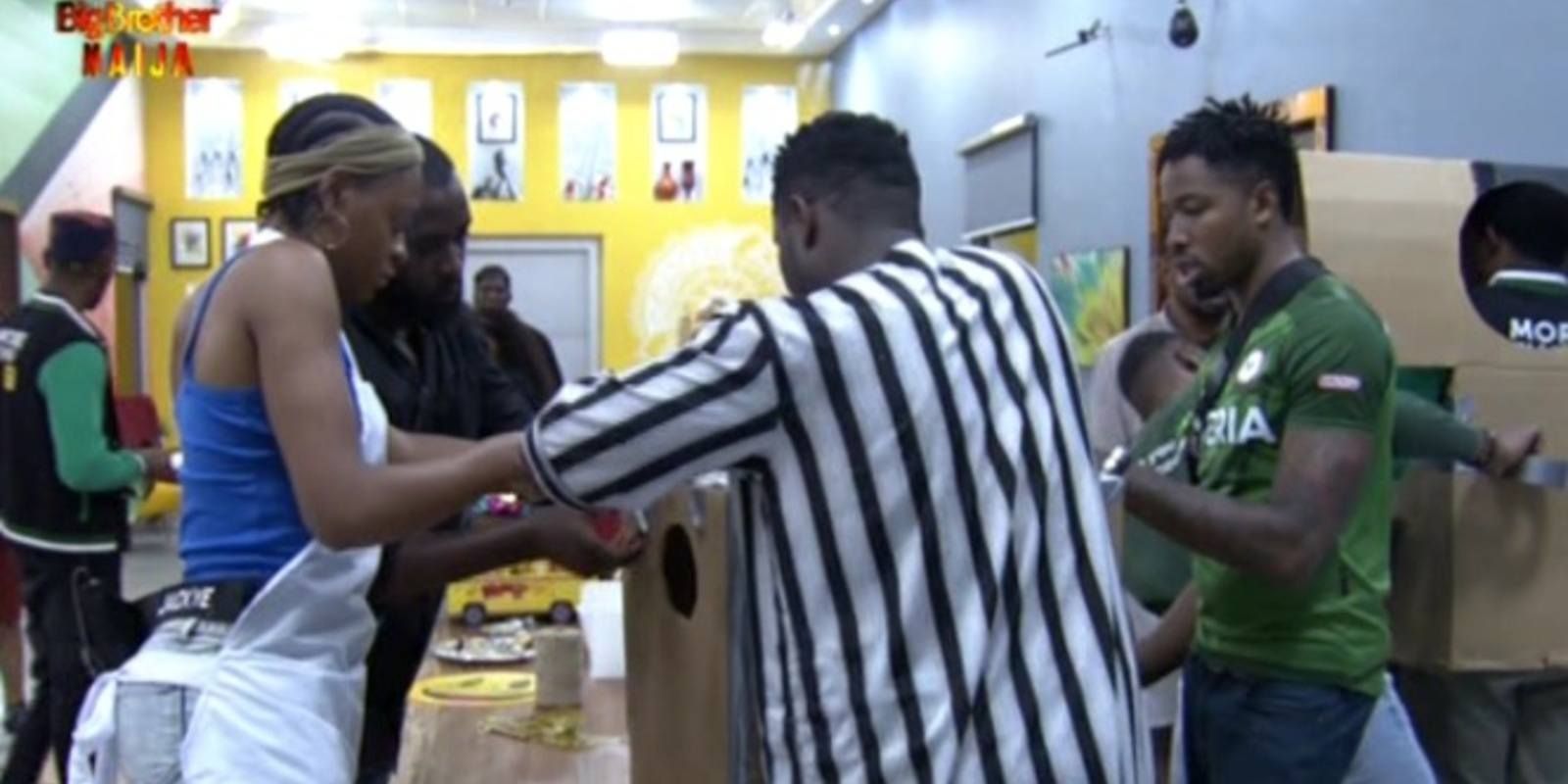 At the sound of the buzzer, the Housemates must start to walk and talk like robots. The moment the buzzer goes off the second time, they stop immediately. 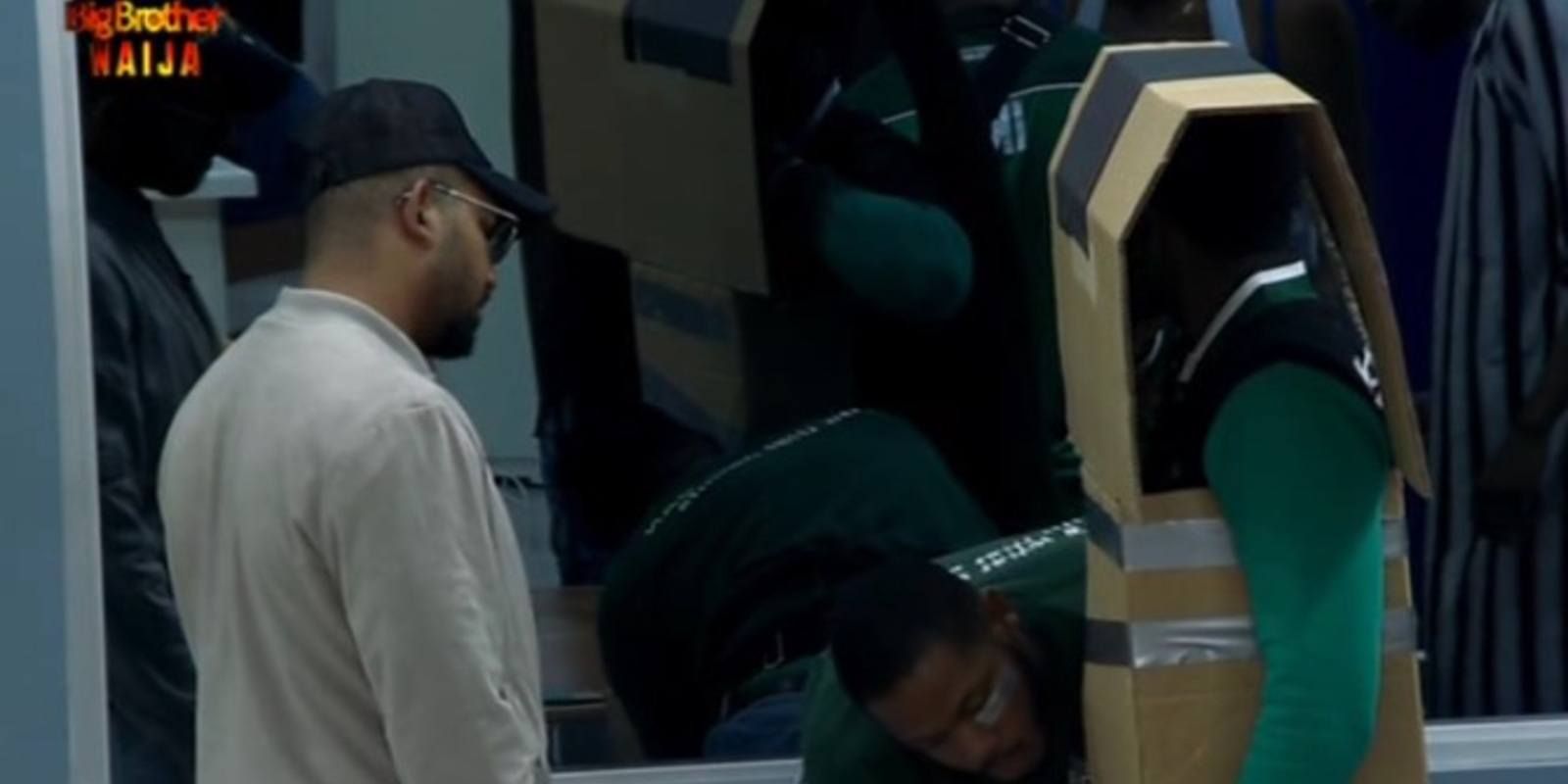 Now here’s the catch - the successful completion of this challenge will determine whether or not they will go ahead with the other two. Because this Task is literally speaking, lifesaving to the Housemates, we can bet they will put in their very best. Or else, na OYO dem dey!

As part of the three-phase Task the Housemates have to complete in order to get back their privileges from Big Brother, the fantasy challenge consists of six different parts. And each part must be completed individually. Unlike the robot Task which was done as a group, whoever wins this gets 500 Bet9ja Coins while the second position is rewarded with 200 Bet9ja Coins. 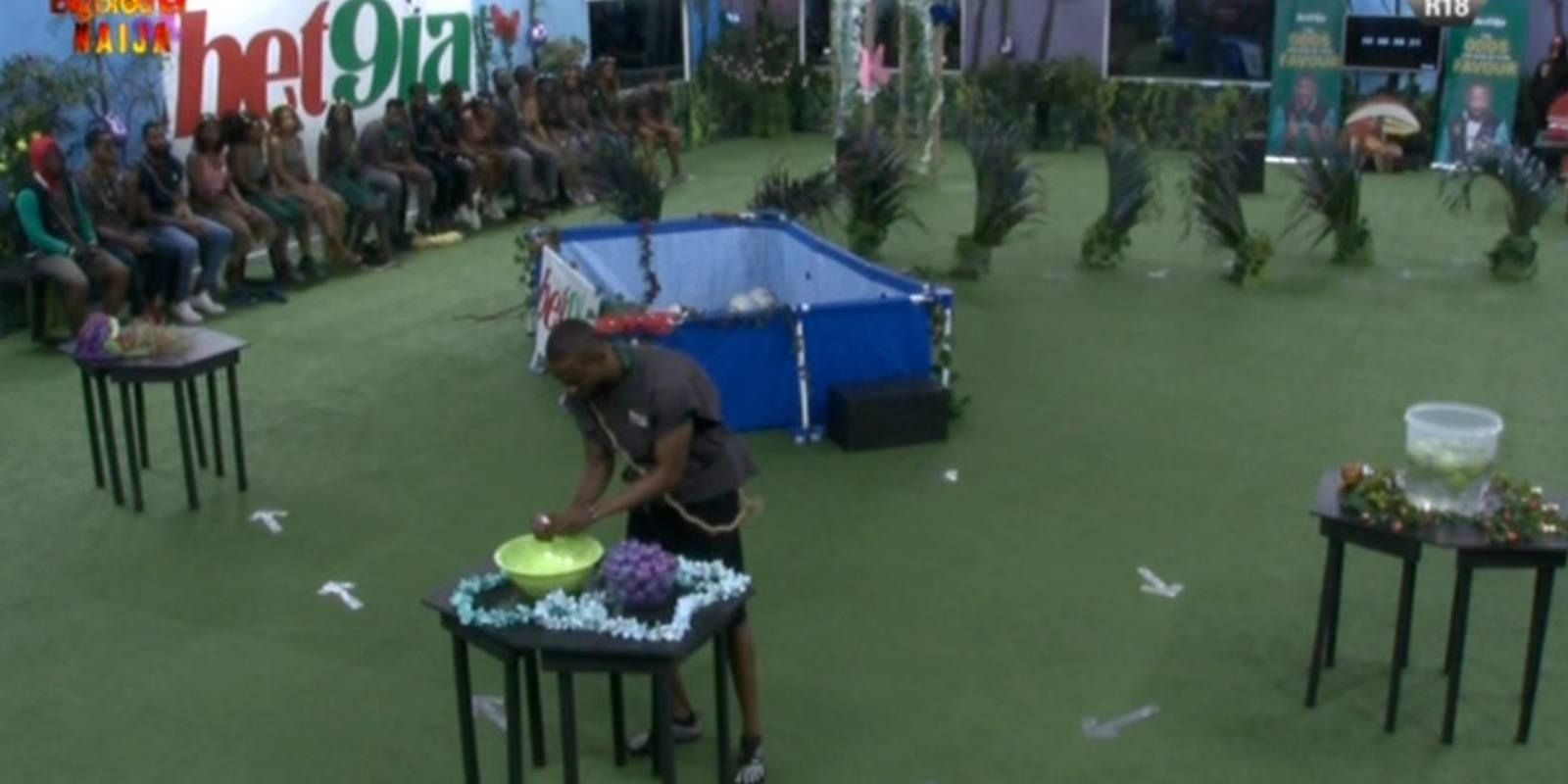 The six phases of this challenge must be completed within four minutes and any Housemate who doesn’t meet this gets disqualified. The challenge consists of six different stages which include the balancing, the magic potion, the magic ride, the mystic pool, apple fishing and the dragon egg peeling. Each must be done without breaking the rules of the Game. 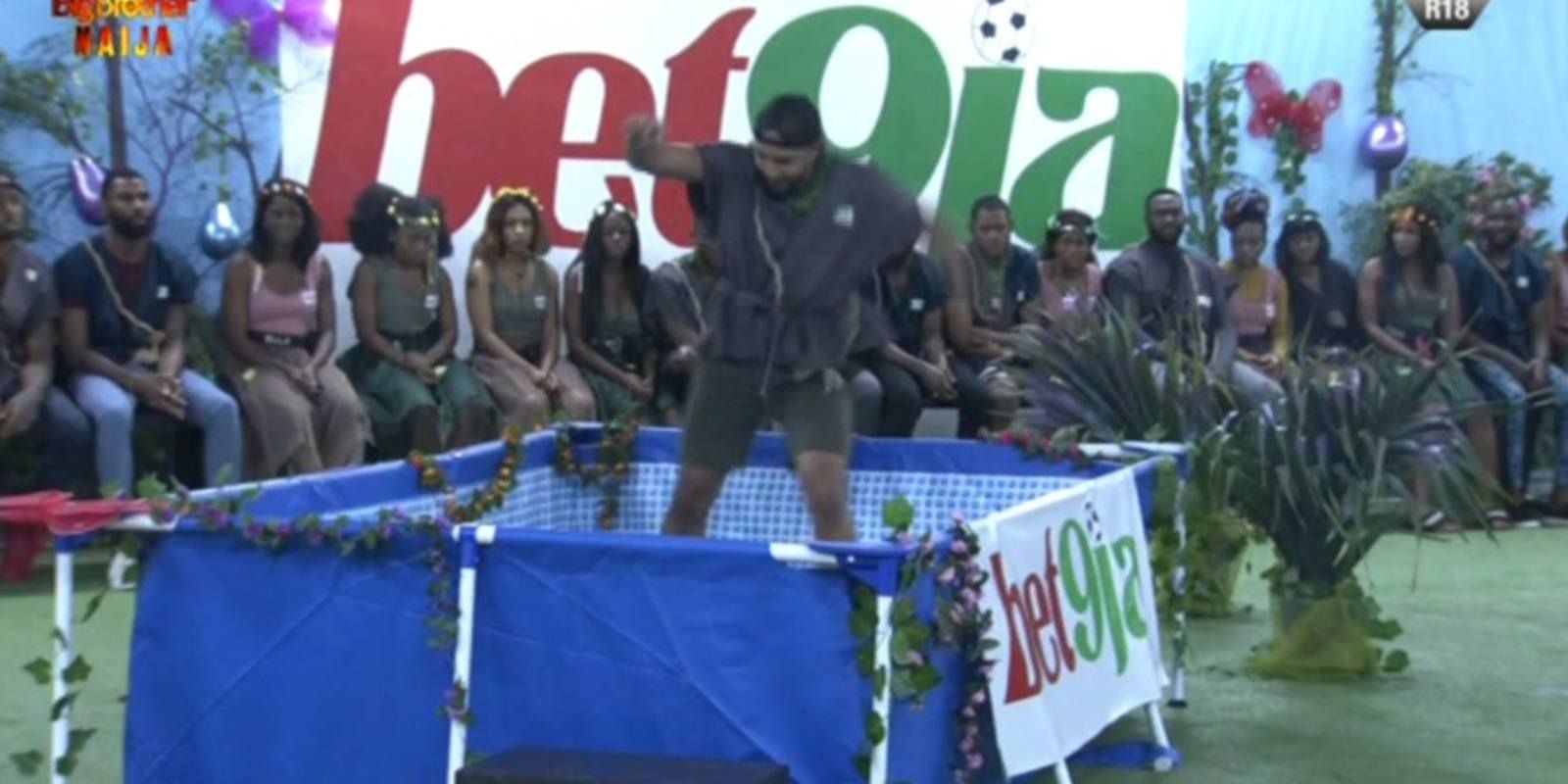 How It Went Down

Omashola was the first to go and he finished in one minute and 35 seconds. Among the guys, Mike completed the Task the fastest in 44 seconds while Sir Dee came second finishing in 45 seconds. Well done, Mike. 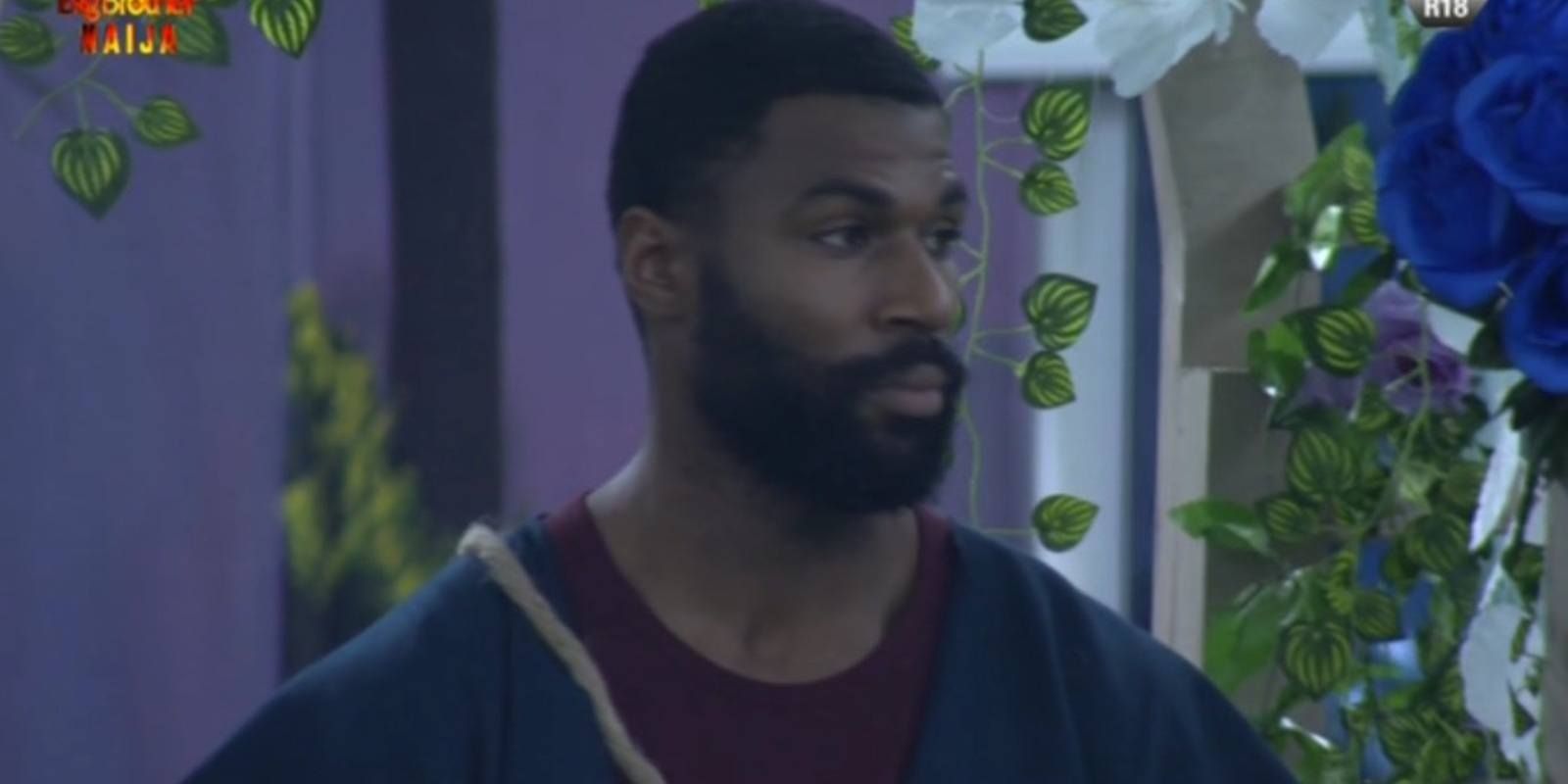 The ladies too tried their best, but it just wasn’t enough to beat the likes of Mike and Sir Dee. The determination to win the Bet9ja Coins were written all over their faces. Even though she was later disqualified, Khafi was the best among the ladies, finishing in 1 minute. Besides Khafi, also disqualified were Tacha and Mercy.

Though Biggie commended the Housemates for their overall performance at this challenge, they were made to realize that it’s not over yet. If they must get half of their shopping allowance for the week, they have to come up with 2,500 Bet9ja Coins by tomorrow evening. How they will do it is left to them. But will they be able to raise up to that amount of Coins?

Biggie is really giving the housemates a hard time for their disobedience! Share your thoughts in the comment section below

BBNaija: If I wanted Nengi I would have bonded with her – Kiddwaya

#BBNaija: Why I can’t have a relationship with DJ Cuppy – Kiddwaya

#BBNaija: “I miss kiss die, I love to kiss” – Laycon cries out