The Veto Power Game of chance, which is one of the major events viewers of the BBNaija show look forward to has been questioned by one of the housemates, Jackye.

The Veto Power Game of Chance is usually played as a separate game in which the winner is the Veto Power Holder (VPN) who possesses the authority to save a nominated housemate and replace such with another that was not nominated. 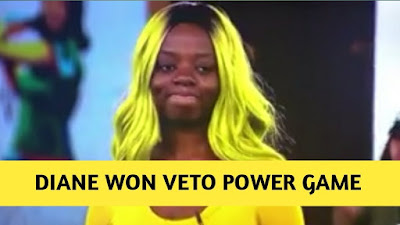 Following the events of Monday nomination challenge, Jackye has requested that Biggie should not make it compulsory for the Veto Power Holder to use the power as it makes them emotional.

Jackye requests that Biggie should make it not compulsory for the Veto Power Holder to use the Power as it makes them emotional.#BBNaija https://t.co/revLjQSFQe pic.twitter.com/qudeYQH0OW

After the fate of the housemates nominated for possible eviction were revealed, Biggie asked Diane, who was the holder of the Veto power for the week to save one of the nominated housemates and replace with someone that was safe. Diane found this a bit difficult as she first stumbled through two names, Seyi and Mike, before finally settling on Joe as the ‘scapegoat’.

Hot now!  BBNaija: ‘Ike Is My World, Tacha Is A Sweet Girl’ - Mercy Reveals She Would Save Them, Nigerians React [Video]

She found this decision very hard, and another housemate, Seyi, also corroborated this during his own diary session as he made reference to his own tenure as the holder of the Veto power. He failed to save himself and was hereby disqualified from participating in the Veto power game of chance although Biggie eventually forgave him.

Do you think Biggie should honor Jackye’s suggestion? Tell us what you think in the comment section.