If there is anyone who knows how to set tongues wagging on social media, it is definitely Idris Okuneye, popularly known as Bobrisky. If he isn’t bragging about the numerous rich lovers in his life, he is giving the ladies a run for their money. This is the case with his recent post on social media.

When it comes to being the queen/king of controversy in Nigeria, Bobrisky certainly wears the crown. From claiming to have a girlfriend to claiming to be a second wife to some rich man, Bobrisky’s identity crises has always been a thing of concern. Well, it appears he is finally coming to terms with how he would love to be identified and with this, cleared the confusion about his gender as he referred to himself as transgender. While many people were yet to get over the revelation which was made on his Instagram page, he took to the platform to show off his cooking skills. He first shared his plans to make some food, showing off the ingredients he got. He wrote as the caption, “Happy Sunday guys. I’m about to cook FRIED RICE, stew chicken and porridge beans. You can follow up on how I cook dis meal. My snap BOBRISKY222.”

He then went on, sharing a video of himself cooking, writing: “What a woman can do, a transgender can do better. Don’t laugh. ” 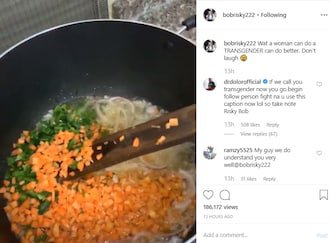 The photo which has since gone viral has got many social media users talking. Here are some comments gathered:

“shania_cookbook: Bob baby I wanna have a taste nah. You know how I love food.”

“tutu_berry01: @bobrisky222 I’ve been sick and can’t eat anything but seeing this alone makes me wanna eat anything eatable.”