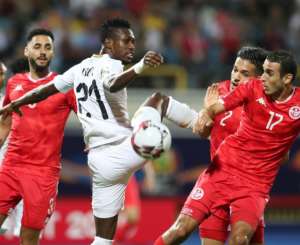 Ghanaians were hoping the Black Stars will end the country's 37 years trophy drought in Egypt.

However, the four-time African champions were painfully eliminated from the tournament after losing 5:4 on penalties to Tunisia.

Following what was a tensed 1-1 draw after both regulation and extra time, the North African side triumphed in the shootout.

Caleb Ekuban’s miss proved to be Ghana’s undoing, as Tunisia netted all their penalties to emerge 5-4 winners.

The FC Metz defender described the team’s exit as disappointing but insists it is time to move on and focus on bigger things and insisted it’s only a matter of time before the Black Stars put smiles back on the faces of Ghanaians.

“We are all disappointed but only God knows best. We just have to keep our heads up and keep going because this is not the end,” he said.

“Now, we have to put everything aside and concentrate on our club. But God has a way of doing things and we know that one day we will make Ghanaian laugh.”

Meanwhile, Ghana’s trophy drought is now set to stretch to at least 39 years after the Black Stars’ latest failure.

Download Taaooma Comedy Video - Moms Will Use Anything To Blame You