In a shocking turn of events, it has been reported that Queen Wokoma’s estranged husband, Prince Kalada Allison, who shared a suicide note on his Instagram page last night, is currently on admission in Port Harcourt, Rivers state, after a failed suicide attempt.

According to his close friends, he attempted to take his life but was quickly rescued and rushed to the hospital where he is currently being treated. They went on to claim that Allison became depressed after his one-year marriage to Queen packed up a few months ago. According to them, this will be the third time Allison is attempting suicide.

It is just a few weeks after their marriage which barely lasted for a year ended, and things might not have been going well for the Rivers state politician, Prince Kalada Allison. He posted a suicide note on social media and most didn’t take it serious as they felt it was just a stunt to seek for attention. He wrote: 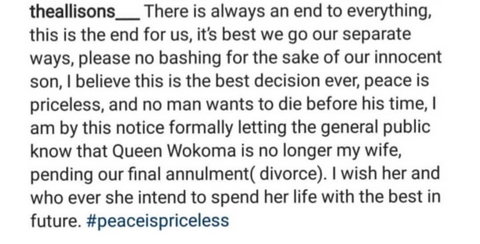 Fans began to call on his estranged wife, Queen Wokoma. Although she was yet to make any official statement about their divorce, however, the suicidal threat by her ex-husband prompted her to address the issue. She wrote We hope Prince Kalada Allison would recover on time. Please join us to wish him well in the comment section.