This morning, a young man took to the popular social forum, Nairaland, to plead with young girls to stop dancing and twisting to Beyoncé’s “Brown Skin Girl” which features Nigerian superstar, Wizkid.

“It has gotten to the point of no return for me. I love Wizkid as much as the next guy and I’m one of the proudest young Nigerians at the moment. He sang in the same song with Beyoncé! You don’t get it. She hollered at him and told him to get on her song and then we heard Blue Ivy’s voice on it! That is not a normal something, my people.” 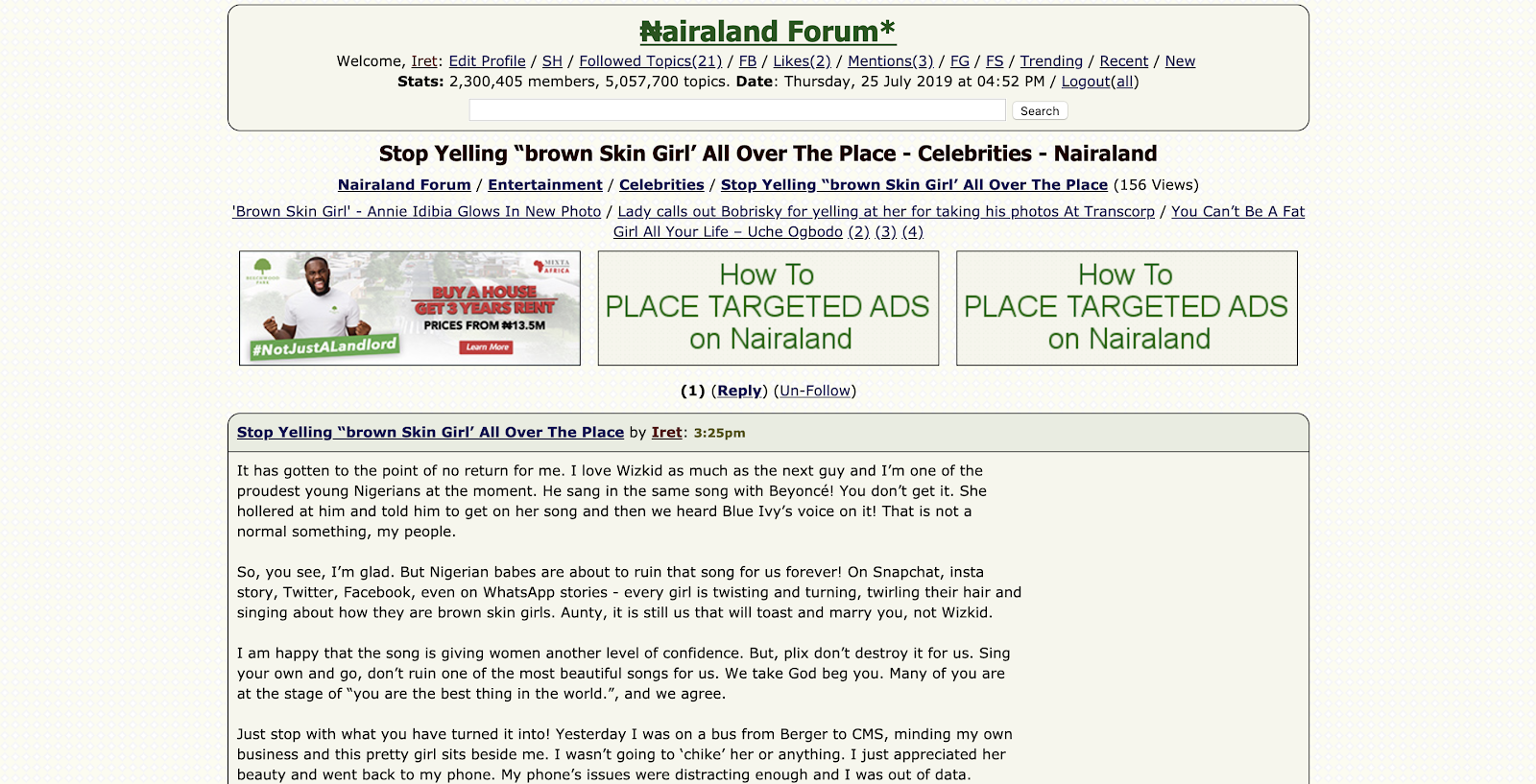 He complained that Nigerian women are insistent on ruining the song for the male folk.

“So, you see, I’m glad. But Nigerian babes are about to ruin that song for us forever! On Snapchat, Insta story, Twitter, Facebook, even on WhatsApp stories - every girl is twisting and turning, twirling their hair and singing about how they are brown skin girls.”

He admitted that the song was doing wonders for women’s confidence, but that was where he wanted it to stop.

“ I am happy that the song is giving women another level of confidence. But, plix don’t destroy it for us. Sing your own and go, don’t ruin one of the most beautiful songs for us. We take God beg you. Many of you are at the stage of “you are the best thing in the world.”, and we agree.”

Then he finally explained the reason behind his anger. He met a brown skin girl on the bus and was too shocked to shoot his shot.

Just stop with what you have turned it into! Yesterday I was on a bus from Berger to CMS, minding my own business and this pretty girl sits beside me. I wasn’t going to ‘chike’ her or anything. I just appreciated her beauty and went back to my phone. My phone’s issues were distracting enough and I was out of data. Getting down to buy was not an option and my boss (who’s a horned tyrant) was on my neck for some documents.

I was typing *606# on my phone when ‘sista pretty’ began twisting and dancing beside me with the song playing from her phone. She was using a snapchat filter. The filter sef was not as fine as she was. I was too shocked to continue with my phone. Why was she doing that?! Why? She did that for the whole song. When she stopped, I was still staring.

That’s not the part that bothered me. I don’t know why but I couldn’t speak o. I couldn’t say a word after. I don’t know if it was the twisting or the song, but I wanted to ask for her number and nothing came out. We got off the bus and still nothing. So, I am not annoyed with her or myself. I’m blaming the song! it’s the thing that girls are using the song to do.

I faced my phone after she got down from the bus and finished borrowing my data. Thankfully, I didn’t lose out on the blog and loose out at work. I can imagine the anger I would have felt if I requested for credit and found out I was not eligible to borrow data? No babe and no data would have been painful!

So, for the sake of our sanity, don’t ruin the song and everything for us! Stop twisting!

Is there a way to help him find the girl?