Veteran and multi-talented Nollywood actor, Alhaji Yinka Quadri who has over the years endeared Nigerians to himself through his awesome acting skills has revealed some intimate details about his family life.

The Nollywood actor who would turn 60 in September is a successful movie practitioner and a filmmaker who is one of the few movie icons who have been able to keep their family life private. As a matter of fact, only very few people know who his immediate family are.

As a Muslim and a top theatre practitioner with women always hanging around him, many Nigerians expected the veteran actor to be married to more than one wife. But surprisingly he is married to just one wife and has been able to keep his age-long marriage going. 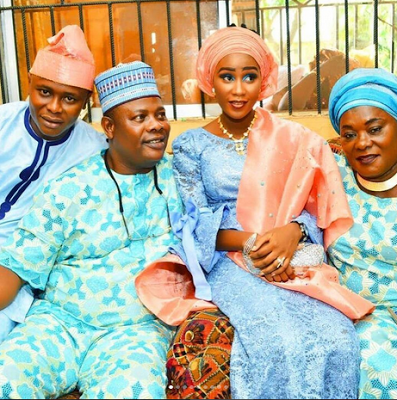 Yinka Quadri who revealed that he married his wife in 1989 has four children from the union namely Muyiwa, Yewande, Olajuwon and Folarin Quadri. He is also blessed with grandchildren. When recently asked how he manages his female fans and admirers, he said:

“It is very important to respect both female and male fans. The issue of female admirers will always come up and as a star, you need to treat them with respect, because without them we are nobody.”

“And for female admirers who are also colleagues in the industry, especially the younger ones, I always talk to them, to get their priorities right, and whatever help and assistance I can render at any given time, I always do that”. 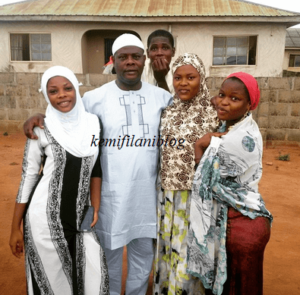 From his response, one can deduce that he is a man with a great respect and admiration for the feminine gender and it was not a surprise when he spoke so glowingly about his beautiful wife. When asked if he would on how he feels about fans knowing more details about his family, he said:

“There is nothing to hide and it is not difficult at all. I am with one wife, we have been together since 1985. But before we got married, I already had a child from someone else. I had a normal wedding ceremony with the woman, but along the line we discovered, we are not compatible.

We will stay together, in a week, that makes 7 days, we fight for 5 days and just be friends for 2 days, so we were not compactable and we did that for 5 to 6 years, so our parents decided it is better we go our separate ways. And since she left, I met this my wife in 1985 and we started having kids in 1989 and she is the only woman in my house.”