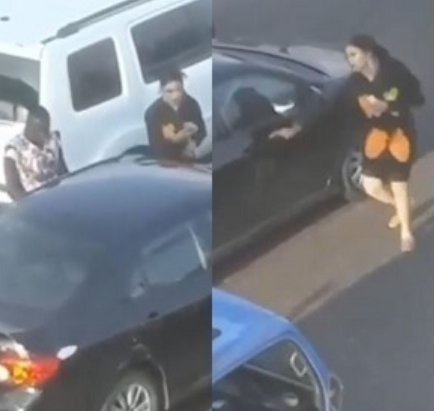 Bobrisky made the headlines earlier after a footage surfaced that showed him in the middle of a serious physical combat with a man that bashed his new Range Rover yesterday in Lekki, Lagos State.

READ HERE: Bobrisky received the beating of his life from a man that bashed his new Range Rover in Lagos

In an update to the story, the popular Nigerian Bobrisky has shared a video of the man apologizing after he got him arrested.

The Cross-Dresser revealed that the incident occurred by 5:17pm on Monday October 21, while he was driving to a meeting. According to him, he was only trying to record what really happened when the man threw the first punch, damaging his iPhone 11 max.

Bobrisky said he seized the man’s phone and car key after his phone got damaged which was when the fight ensued. While the man claimed it was a little misunderstanding in the apology video Bobrisky shared, the cross-dresser stated that it wasn’t and also insisted that he must sleep in a police cell and also fix his phone and car today October 22.

It’s wasn’t a little misunderstanding… if truly it was misunderstanding I should have let you go in peace. But trouble sat on it own you went to pull it. And I’m happy I gave it to you hard. Next time !!!! When you meet people you don’t know you will calm down and know who they are. As about 5.17pm I was driving to a meeting when dis man bashed my car from behind. Mistakes happen, but wat got me so mad was when dis ugly man said wat can I do to him after hitting my car…. ahhhhh I was shocked. I was trying to record his stupidity when he was saying wat can I do. The next thing I saw was he hit my iPhone 11 max too. I got so mad � I ran into his car to collect his phone and his car key Only for him to run after me to collect his phone and car key from me. I fought him like I was on something…. at some point I didn’t even care to see people recording. I was mad �. Your apology might be accepted but you must sleep over in that cell. Then tomorrow you will get me a new phone 1phone 11 max and fix my car. I might be calm and nice. But I don’t take nonsense from any motherfucker.

The guys has apologize. Bobrisky said she has accepted the apology but that the guy must sleep in cell. He also said that he must repair his phone and car. The guy is totally at fault and it's well deserved. pic.twitter.com/Hy3FPBAqub 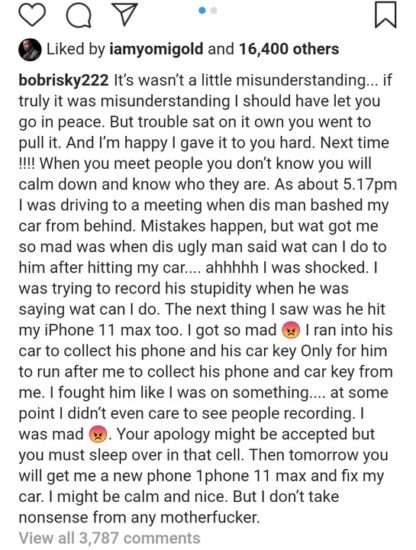 The post VIDEO: Man Who Hit Bobrisky’s Car And Beat Him Up Finally Speaks appeared first on .

Bobrisky reveals he is different from how people see him, asks people born to judge him