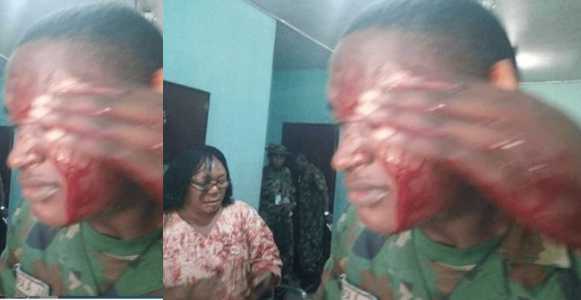 A military teacher escaped being butchered to death in Port Harcourt, Rivers State, as the wife of Air Commodore Irobuisi (NAF2042) attacked him with a machete.

According to reports, the victim had taken disciplinary action against Mrs Irobuisi’s daughter by flogging her. However, when the lady was informed, she drove down to the Air force Secondary School with a hidden cutlass which she used to attack the teacher’s face while discussing with him.

The injured soldier has since been rushed to the NAF Reference hospital, Port Harcourt, while Mrs Irobuisi is currently being held at provost squadron of 115 sog. According to reports, Mrs Irobuisi isn’t a stranger to assaulting military officers and was once suspended from the Nigerian Air force Officers Wife Association for the same reason.

BBNAIJA: Big Brother reveals why he put all housemates up for eviction

BBNaija: See Photo Of Seyi Awolowo And His Girlfriend

BBNaija Jackye’s boyfriend Lami, blasts Ebuka for putting her on the spot during the live show

Rare photos of Teebillz and his beautiful teenage daughter