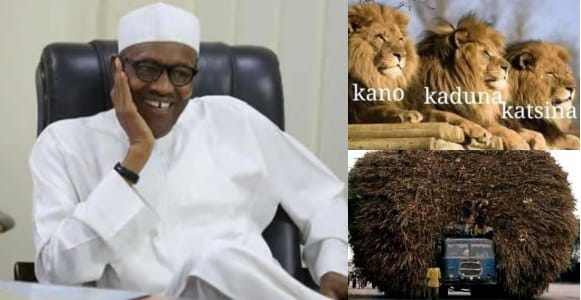 The Kardashians’ name has been a trending topic on Nigerian twitter since INEC began announcing results of Saturday’s presidential election.

According to these very hilarious tweets, ‘Kardashians’ simply refer to the ‘s*xiness’ and the ‘star power’ of election results that could come in from Kano, Kaduna and Katsina states and the influence results from these northern states will have in determining who will become the next president of Nigeria.

See the tweets below…

Kardashians are trending in Nigeria. But it’s for a completely different reason. #NigeriaDecides2019

When they unleash one of the Kardashians for us🥺
#NigeriaDecides2019result pic.twitter.com/EV3eTbz3ua

How can PDP be frowning about the 2018 election results when it's only the adverts number that have been counted, the Kardashians are on their way o. Did you guys not remember how you lost and made a phone call 4 years ago? Common, you should know better na haba. pic.twitter.com/2IwTBgfWm9

why y'all trending the Kardashians now😂😂
Kim Kardashian, Khloe Kardashian……………and others all gonna think is about them😂😂 we play tomuch on this app #NigeriaDecides2019result

The Kardashians and friends… pic.twitter.com/pwUmzuh1TB

Ajimobi can now go and join his daughter on "Keeping up with the Kardashians" pic.twitter.com/VMNh2kP40M

We are praying for the fate of our country and Twitter NG is Trending the Kardashians. What exactly is wrong with you people on this app #NigeriaDecides2019result

The Three Kardashians are not even in yet and they are already rejecting results. #NigeriaDecides2019

Nadia Buari's daughters all grown as she takes stroll with her husband This website uses cookies to improve your experience. We'll assume you're ok with this, but you can opt-out if you wish.Accept Read More Pr
July 20, 2019July 20, 2019

Music superstar, David Adeleke, a.k.a Davido has emerged the richest Nigerian on Instagram, with his single post valued at over N26 million. According to Instagram Rich List 2019 by Hopper HQ 2019, Davido stands at second position in Africa and occupies 38 positions on global rating. Mohammed Salah,
July 25, 2019July 25, 2019

Nigeria music star, Wizkid has come hard on a blog site that labelled him a humble man just because he ate pounded yam. According to the blog site, Wizkid showed how humble he is by eating pounded yam with his son Zion. However, the singer and songwriter who seems not too pleased with their caption
March 20, 2020March 20, 2020

Nigerian big boy, Ray Hushpuppi was on Instagram attending to questions from his fans last night and he touched on quite a number of topics including the status of his ‘fight’ with his rival and former best friend, Mompha. The flamboyant businessman also explained why he doesn’t share photos o
August 14, 2019August 14, 2019

Mavin starboy, Rema, yesterday received the Honorary Membership Award of the BMW Club of Nigeria for his commitment and promotion of the brand in his recent hit single, “Beamer” (Bad Boys). Rema was recieved by the members of the BMW club at Eko Atlantic where they bonded over races and drifts w
March 9, 2020March 9, 2020

50 Cent is definitely one of the most vocal men in the US music industry. The rapper-turned-entrepreneur is probably the biggest troll/bully on the internet, consistently going after his usual targets. It’s common to see him hating on Floyd Mayweather, Ja Rule, his baby mama; Shaniqua Tompkins, an
January 11, 2019January 11, 2019

Moyo Lawal Says Her Nudity Does Not Drive Her Morals

Nigerian actress, Moyo Lawal has bare her thoughts on marriage, asking why many see it as the overall even with so many broken homes being recorded today. Moyo went on to state that despite being one who exposes her body on social media, she still has morals and discipline.
November 6, 2019November 6, 2019

Frank Edwards is celebrating his 17th year of being healed of Asthma. According to him, he has never used an inhaler since then. Saying a prayer for those going through same challenge, Frank Edwards wrote; “Today marks 17 years God healed me from asthma and I’ve nev
July 19, 2019July 19, 2019
Next