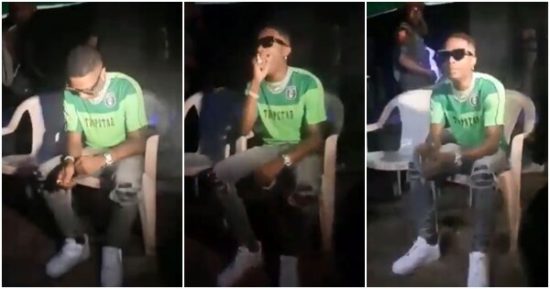 Wizkid has been making headlines on social media after he performed at a concert at Ilorin and was nearly mobbed on stage by overexcited fans. Others were also amused that he sat on a plastic chair.

Ahead of his StarBoy Fest show in Lagos on Boxing Day, Wizkid dashed to Ilorin, in central Nigeria, for another gig on Christmas Day, for which he was said to have been paid handsomely.

But it was an experience he would not forget quickly.

On stage at the Kwara Hotel venue of the concert, he was nearly mobbed as a fan jumped over asking for a bear hug. Video of the scene showed the hip-hop star being rough-handled and struggling to extricate himself.

Another shared video shows Wizkid sitting on a plastic chair backstage. In the video, he was seen yawning, appearing flustered about it all.

His fans were outraged on Twitter, angry that he was not deservingly treated like a star and that the concert was poorly organised. Some also wrote that Wizkid should never have gone to the city.

Blogger JJ Omojuwa weighed in on the fallout of the treatment: “E go tey before Wizkid go back Ilorin again. It’s crazy. I don’t know how Wiz landed in Ilorin on Christmas Day but the host no try. Not at all. That’s an African icon right there,” he wrote.

But there are some who felt the Ilorin episode was exaggerated and instead read an entirely different meaning to the video showing Wizkid sitting on a plastic chair.

“He’s a Celebrity of high calibre but he wasn’t proud/pompous refusing to sit on a plastic chair..I Respect his humility #ilorin”, wrote @shorlah

Wizkid, in numerous videos posted on his Instastory, did not show any dissatisfaction about his experience in Ilorin.

Next story :DOWNLOAD Premiere: Chee - So Beautiful + Hark The Herald

Fancy Gadam is a ‘Small boy’ full of jealousy, we used to send him - Maccasio jabs This website uses cookies to improve your experience. We'll assume you're ok with this, but you can opt-out if you wish.Acc
July 25, 2019July 25, 2019

Nollywood actress, Osiobeloveth has accused the Rivers State Taskforce of destroying food items she bought with a friend. She further claimed that the taskforce officials also poured kerosene on the food items which were quite expensive. The actress said; This is what happened today in port harcourt
April 1, 2020April 1, 2020

Video: Lady who accused Davido of impregnating her retraces her course after threat of arrest

The two ladies in a viral video earlier today accusing Davido of impregnating one of them, have recanted. The ladies who shared a new video after Davido threatened to get them sued have come out to say it was all jokes. Looks like the ladies were clout chasing and it got out of hand, the
October 23, 2019October 23, 2019

Ex-BBNaija Star, TBoss Discloses What She Loves the Most About Social Media In Nigeria

TBoss, former Big Brother Naija housemate, took to her social media page to reveal what she likes the most about the social media platform in Nigeria. The reality star who has been in the news for her budding pregnancy revealed that she discovers new things about herself every day on social media. S
July 24, 2019July 24, 2019
Next