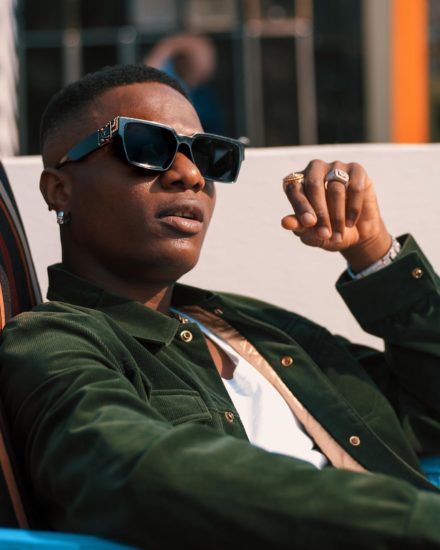 Nigerian music star Ayodeji Balogun aka Wizkid is no doubt one of the most loved artistes in the music industry and this is evident in the way fans outdo themselves to prove their love for the music star.

Just recently, Wizkid had his highly anticipate Starboy Fest in Lagos, and the venue was packed full to say the least. Like other shows the music star has performed in over the course of the year, the event was not free of drama, especially as it concerns his encounter with fans.

A video making the rounds on social media captured the moment an overzealous fan who was close to the stage, mounted the podium and embraced the singer during the middle of his performance.

This was followed by security operatives swiftly addressing the issue and getting the individual off stage.

Unknown to them, the issue was far from over. Moments after another fan who wanted to have physical contact with Wizkid mounted the stage. Unfortunately, as the bouncers attempted to whisk the guy off stage, he latched on tightly to Wizkid’s leg, causing the singer to fall on stage.

Shina Peller is letting everyone know he is fine and in good spirit after being granted bail by the Lagos State Police Command. The House of Representatives member and owner of Quilox was arrested after the vehicles of some of his customers were towed for obstructing the free flow of traffic. He wro
December 25, 2019December 25, 2019

It’s been going on for a while now but got more attention yesterday that president Muhammadu Buhari is allegedly taking a new wife today, in person of current Minister of humanitarian affairs, disaster management and social development and the former Federal Commissioner of National Commission for
October 13, 2019October 13, 2019

BBNaija: Fine Or Ugly Art? Pepper Dem Housemates’ Drawings Will Crack You Up

The Pepper Dem housemates are on a roll tonight for the Thursday Night Task presentation. They were all dressed in school uniforms provided by Big Brother. Once the buzzer went off, they started the presentation. Sir Dee introduced the Pepper Dem High School (that was the name they came up with for
July 26, 2019July 26, 2019

Singer Davido, despite having two babymamas, is set to wed his love interest, Chioma after his family went to meet hers for proper introduction. The singer looks to be keeping to his words after he gave Chioma ‘Assurance’ in May last year, he is ready to tie the knot with her. Davido and his fam
September 4, 2019September 4, 2019

Sophie Momodu Davido’s first baby mama, Sophia Momodu is not here for jokes as she shot a bullet full of subtle shades at him for his recent statement  that his only achievement that made his life a complete success is getting married and having a son with his fiancée, Chioma Avril. Many social
February 17, 2020February 17, 2020

“I’m not happy..I have mostly users around me. I'm so deeply hurt” – Ifu Ennada

#BBNaija: ‘If you were a Boy, I would have beaten you up’ – Ike tells Mercy (video)

Big Brother Naija housemate, Ike had a mild drama in the house today after his love interest, Mercy moved his belongings. According to Ike, the way Mercy touches his stuff especially his Coins showed zero respect on her part. This didn’t sit well with Mercy as she felt Ike insulted her all because
September 16, 2019September 16, 2019