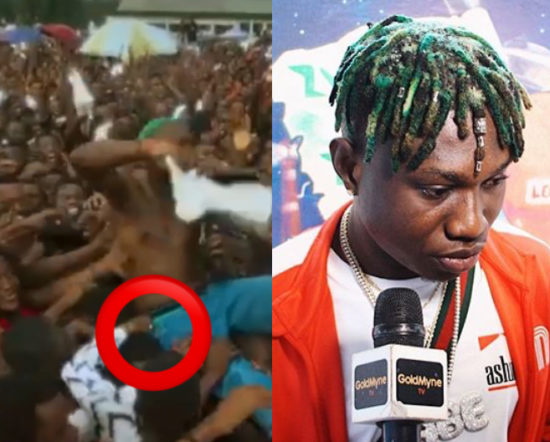 When a favorite celebrity comes close to the crowd, fans pretty much lose their minds. Some have weird emotional feelings, others want to freeze but you see the set of peopl captured in the video attached below? They want to steal everything.

In a new video that Zlatan Ibile uploaded on his Instagram page, the singer can be see the moment he jumped into a crowd of fans while he was performing on stage.

It appears that he had pre-planned the jump because his shirt and jewelries were not on him when he jumped.

Luckily for him the crowd caught him, and those trying to steal from his pocket were left in disappointment because his pockets were empty.

“You are shameless and not worth having as a frien…

Lizzy Anjorin write a petition to NDLEA against Toyin Abraham, accuses her of drug addiction

#Bbnaija: Metropolitan Police are expecting me back at work – Khafi

BBNaija: Omashola begs Big Brother for one favour if he gets evicted from the show

“Release Tacha Now!!” – Tacha’s Management calls out BBNaija Organizers after they held her back for refusal to grant interview.

Davido And His Girlfriend, Chioma Step Out To The Club In Grand Style

BBNaija: Watch Moment Mercy Brought Out A D!ldo To Play On The Bed With Ike (Video)

Wealthy people in Nigeria are a joke – Victor Asemota